Credits where credit is not due

I don't know about you lot, but for several years now something has been grating on me regarding ITV's closing credits. "See you next week everyone" is regularly uttered out of the mouths of key ITV talents, only for us the audience to swiftly (and inconsiderately) find ourselves in a blackout. The same white font, on the same black background for the majority of ITV's output. The only regular exception to "one-size depresses all" is the news, where they are embossed over a wide shot of the presenters.

I am a humongous ITV fan, yet it sadden me as an attention to detail stickler that ITV is only too keen to turn off the lights for the curtain call of their hard-working production teams. ITV is the home of mainstream, big budget entertainment powerhouses, iconic soap operas and daytime staples, but they lack TLC when it comes to CC.  Sorry ITV but the programme is not over in my eyes until the copyright disclaimer and production company logo have performed their bows.

ITV's current brand standard of what they term the ITV Reem typeface is quite frankly pre-historic and reminiscent of silent movies. In fact, many silent movie captions were more dynamic. Go on ITV, make creative credits your modus operandi. Don't worry, the continuity announcer can still flog your upcoming programming wares, and you can still box them in, squash them or put them in a blender. Only now, you will be presenting a consistent story to the viewer from the first note of the opening theme right through to the jingle of the production company. Dare I even suggest that ITV let the closing credits run undisturbed and give the "now and next" ending intruder an early bath ?


It hasn't always been that way though. Take a trip back to the 1990s and you could not move for creative closing credits on ITV. The "holy trinity" of Sat'di nights -  as we say where I'm from  - all had it nailed. Gameshow Catchphrase bidding us farewell with the credits overlayed on a wide shot of the studio with revolving set in the background and Blind Date's Cilla clapping and waving to her 'enders with a sofa full of loved up and singletons.

Over on Gladiators, banners, foam fingers, jubilation and bouncing babies were to be found by the bucketload as Ully and Fash said tara until next week. Often the Gladiators end credits did not even use their own theme music, but instead tracks such as Thin Lizzy's The Boys Boys Are Back In Town. But it worked, and it worked big time. Advertisers practically queuing around the block for a Saturday night slot in an ITV ad break.

Off to the pub: Roy Walker and contestant Michelle at 21:50

Awooga: Ulrika and Fashanu are exiting the NIA at 48:48

Catchphrase, Gladiators and Blind Date all told the viewer a consistent story. They set their stall out with appropriate opening titles, the programme content was slick and high quality (particularly Gladiators) and they stuck to the same fonts/typefaces used during their beginning and middles for their closing credits. All in all, these programme were the complete light entertainment package. The ITV of today is saying "two out of three ain't bad" by having imaginative opening titles and great content but lacklustre closing credits. Viewers are getting a sense of "money grabbing," when it could be more of a case of caring with a commercial sense.


Having said that, there have been a couple of glimmers of hope in recent years. The popular drama Broadchurch's closing credits saw the background of dark waters, albeit with the ITV Reem typeface embossed on top. In light entertainment, a 2013 episode of Ant and Dec's Saturday Night Takeaway to celebrate St Patrick's Day shunned the ITV Reem font completely. The usual background remained, only for a distinctly Irish style of writing to be adopted. Furthermore, they went a stage further and referred to everyone as "Paddy," including hosts McPartlin and Donnelly. On this occasion - although not perfect - ITV surprised and delighted by uniting the opener and "meat" of the televisual jigsaw to the closer. More please !


The BBC has been the shining beacon for creative closing credits for several decades. They're pretty darn good at opening titles too. Indeed, in my humble opinion Live and Kicking's opening titles will forever be the greatest in light entertainment. The premise is - like most winning details - excruciatingly simple : a pinball whizzing around the former Beeb hub Television Centre, the backdrop for the entire 3 hour 15 minutes Saturday morning romp. Logic + Simplicity = a bona fide Little Touch. I wonder how long it will be before we see the pinball flying around Salford Quays...

Looking to comedy, Keeping Up Appearances is another comprehensive I , II and III-er. Hyacinth Bucket is seen taking a book on "Modern Etiquette" from a crowded bookshelf, writing a "Candlelight Supper" invitation with a quality pen, using an adhesive to bypass licking a stamp, before being OCD about the angle of the stamp placement with a ruler. Her milkman is also in for the Bucket treatment as she takes an empty milk bottle from her dishwasher and places a note to him in it. There and then, the viewer knows in 30 seconds the sitcom in a nutshell.

Writer Roy Clarke delivers the comedic goods and before you know it Hyacinth is setting a table in the closing credits. Gradually the handiwork of the ghost of Hyacinth accumulates: napkin origami, precise cutlery placement and a flower arrangement.

The finishing, dare we say Touch, is a name place card of a gentleman named  Harold Snoad. The music lingers, before the place card is topped by "Produced and Directed by" in conjunction with a very "end of the show" sounding note. Catching newbies off-guard, the music starts to meander a little more, before we get the final burst of information once again right on cue with the actual final note. That final burst of information is the BBC logo back in the days its logo was italicised with dashes underneath, alongside the year, notably in Roman numerals - a tradition that is maintained to this day. 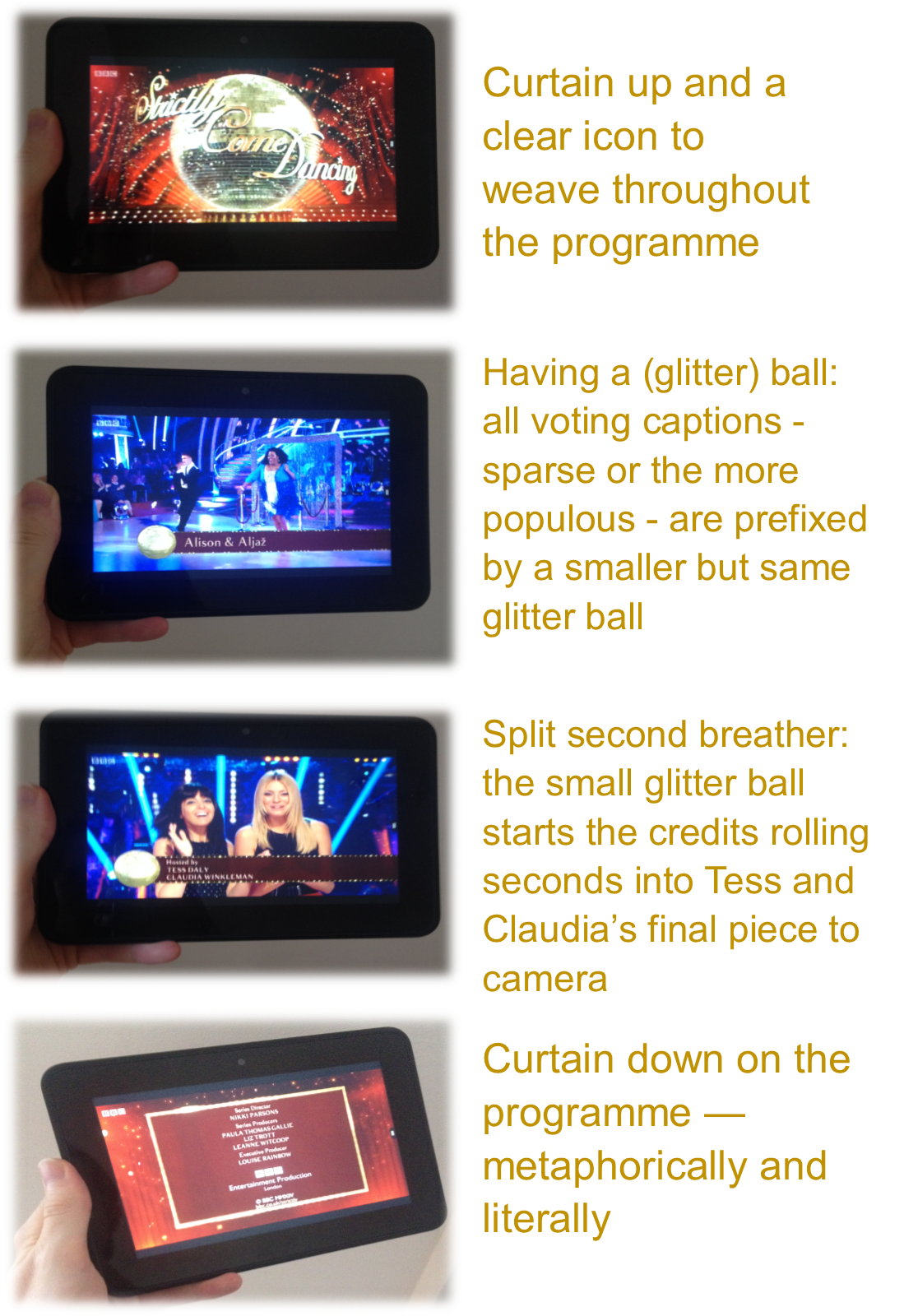 
Oh, and another thing...bring back the the regional ITV logos. Whatever happened to thinking global but acting local ? Any programme made by ITV Studios in Manchester is an ITV Studios Granada production, just as any telly show canned in Leeds is an ITV Studios Yorkshire production. Embrace your heritage ITV and demonstrate concrete committal to production completeness by resurrecting the G, the Y, and LWT - at the very least.


ITV reverting back to inspired closing credits is not going to change the world. However, what it will do is ensure a creative rekindle on the end front, to go with the already tight programme beginning and middles.