The fun side of detail delights 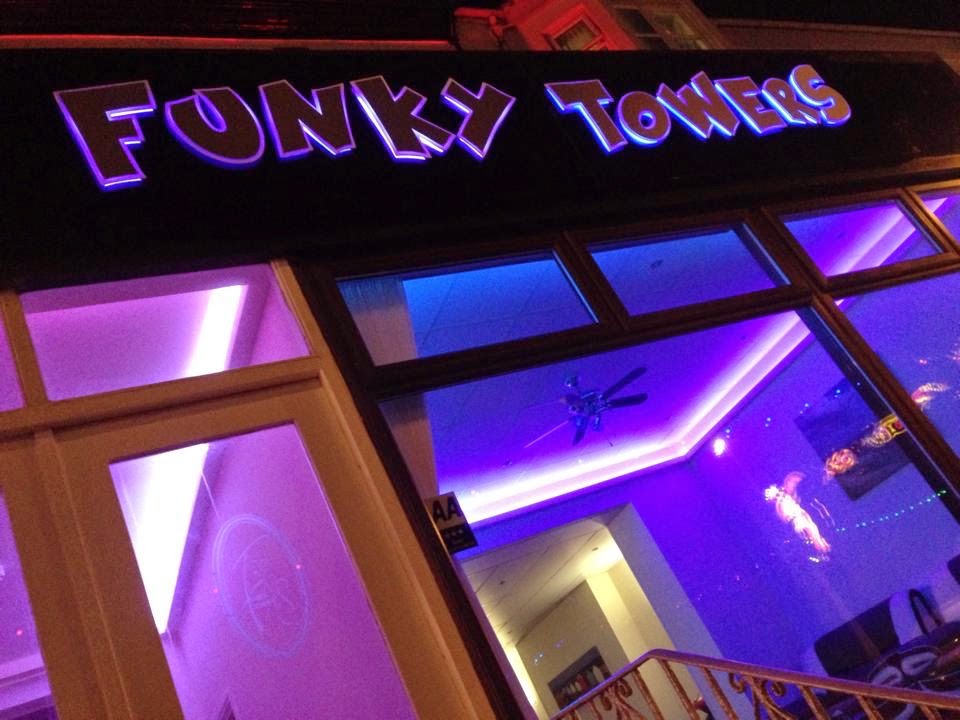 Funky Towers is located on Blackpool's promenade, halfway between the Central and South piers. Capturing kiss-me-quick playfulness in a tasteful, less intrusive way, the establishment was an obvious candidate for further seaside scrutiny.


From automobiles to accommodation 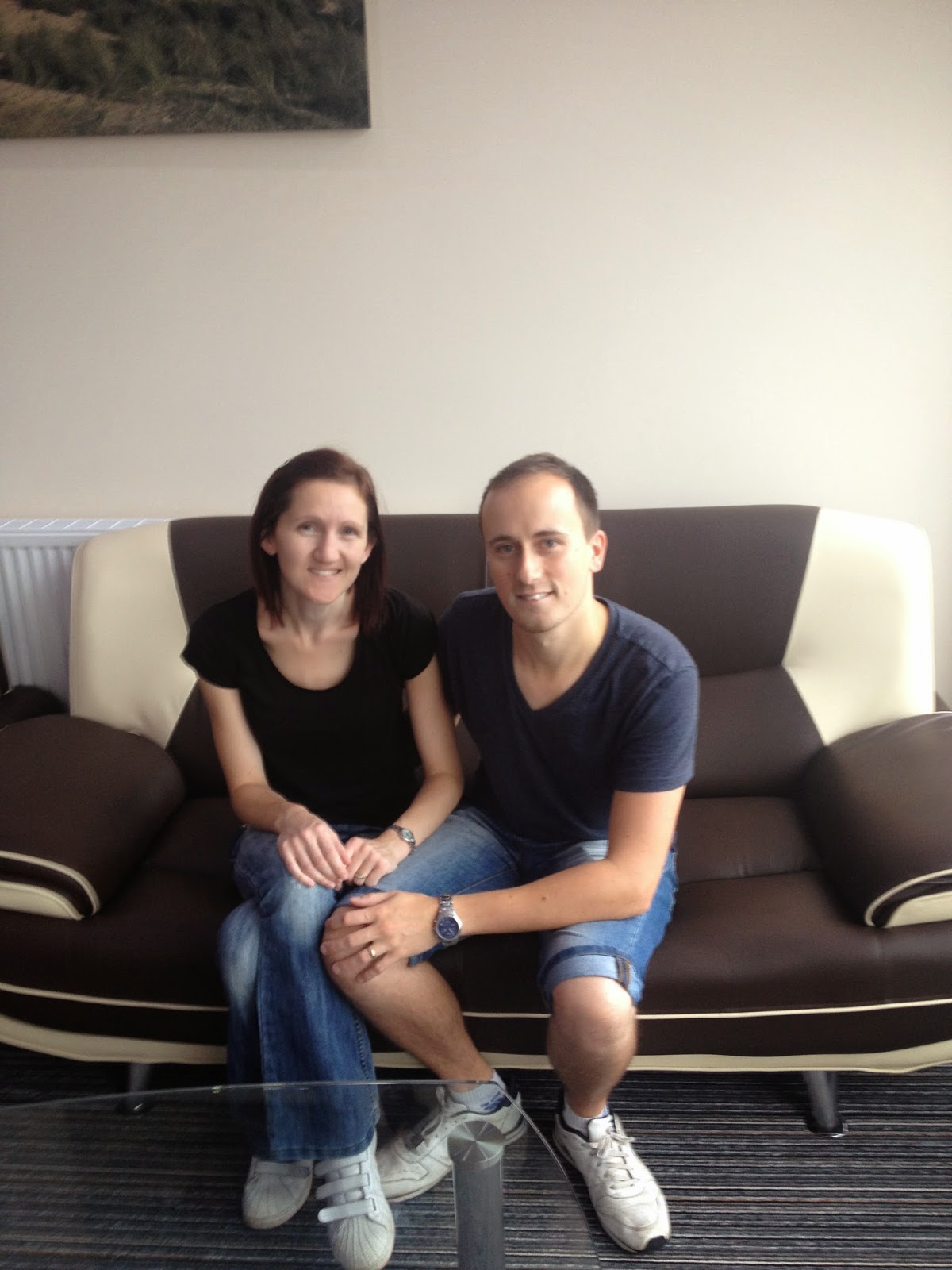 For over a decade, Adam and Becky Lancaster have been at the helm on the Fylde coast. Fast approaching their 11th year in April 2015, the couple set out as 19 and 20 year olds with virtually zero hospitality experience. Having previously both worked in the automobile trade, one might assume that bank funding might have been hard to come by. Yet in the end, pre-recession ease of lending if a business plan was watertight, coupled with family backing, saw their new venture prevail.

Back in 2004, the couple were met by a building that needed more than just a lick of paint:


"To be honest it was a bit run-down, a bit typical Blackpool. It was doilies, it was lampshades in the window."

The previous owner had run the street level cafe as the main revenue stream, with the accommodation monies being sidelined. However, Adam and Becky turned the business model on its head a whole 360 degrees: emphasis shifted towards putting heads on pillows. 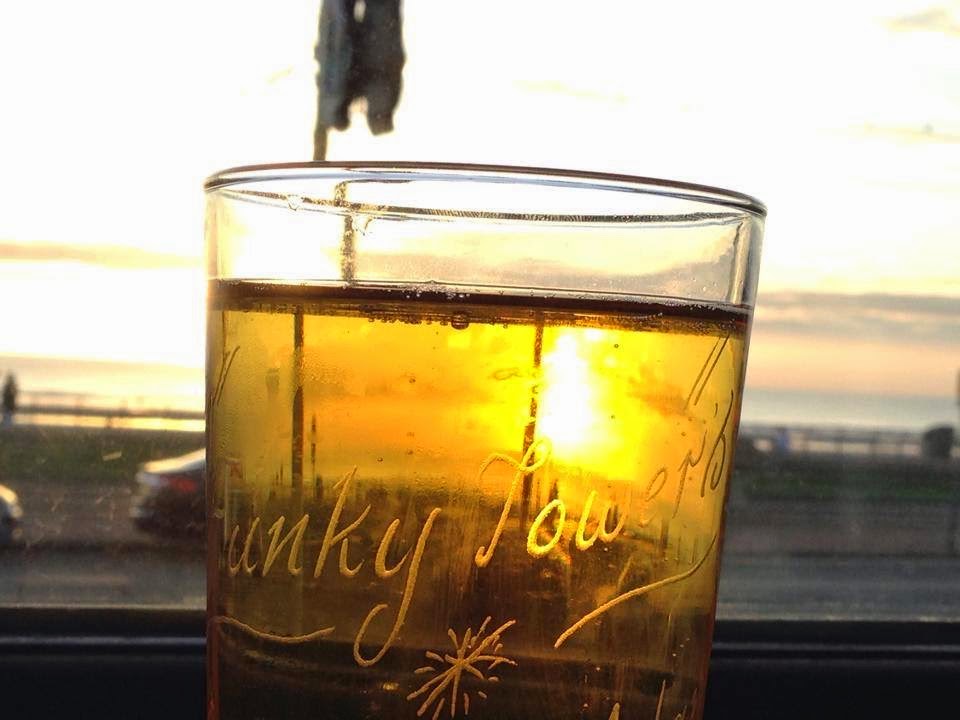 The concept for Funky Towers was seen as a necessity to stand out in a then intensely commoditized seaside resort. In a town where it is not uncommon to find more than five accommodation providers all sharing the same moniker - albeit often in various forms - Adam and Becky have a clear stamp of originality.

Despite having 14 bedrooms, Adam states that he would not change the configuration. Indeed, he is quick to point out that not many of his competitors can accommodate up to six Guests in one room. Talking of that room, it is where you will find the Funky Shower, a scale Little Touch that is also becoming a firm favourite at the hotels of my old employer, Bourne Leisure's Butlins.

Talk soon turns to one of Blackpool's "hot topics" of recent months: to zone or not to zone, that is the question. Should stags and hens be penned into a couple of streets, allowed to roam free or banned completely ? Adam's initial response was "it's tough, it's tough," and seemingly unwilling to commit to a thought camp. Nonetheless, Adam's actual standpoint on adult only groups soon became clearer:


"I don't think they can ban them, I think that's a bad thing for Blackpool. As for zoning it, I think something needs to be done there. I don't think they should be wandering down the street with hardly any clothes on, with families covering their children's eyes."


The above sentiment was also expressed on BBC Radio Lancashire, and the station previously turned to the couple for thoughts on Winter Gardens summer 2014 anchor, Mamma Mia.  ITV Granada Reports, BBC Inside Out and Studio Lambert's Four in a Bed and Gogglebox, just a selection of the other media interest that has come a-knocking at 297 Promenade.

When put to Mr Lancaster that he must be pleased that the boozy Tower Lounge is closing, the response is a quick "depending on what they replace it with." My hunch is that it will be another "sideshow" from the Merlin Entertainments portfolio, likely a version of the Legoland Discovery Centre from The Trafford Centre. For the record, Little Touches ® and Funky Towers would welcome something like that with open arms.

As to the missing leisure link, Adam firmly remarks a "proper arena." Having a Blackpool equivalent of Manchester Arena or Liverpool's Echo, he perceives would be a big year-round draw. 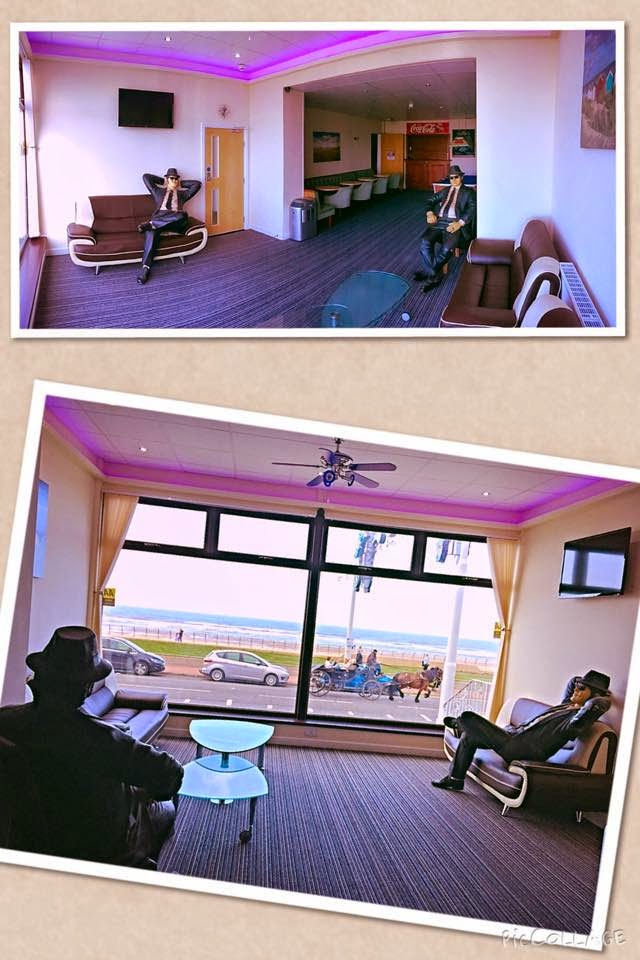 In hospitality we often use the phrase points of difference to describe the focal and talking points used as a springboard for Guest-Host interaction. However,the statues of The Blues Brothers which are positioned on the sofa close to the front window are undoubtedly persons of difference:


"We put them in to attract attention and at the time I thought, no, it's tacky, don't like it. But we put them in and everybody loves them. The first thing they do is they have their pictures with them and upload them to Facebook. Going past, flashes, people standing outside."

When Blackpool FC were promoted to the Premier League, the fixed element of the Hollywood porcelain lads was met by a variable in the form of the local team's orange scarves. Dressed up, they were then moved to the roof for all to see - players, fans, Sky News, ITV and donkeys.

Praising Funky Towers for nailing the fun side of attention to detail and asking why other hoteliers have failed in their attempts, Adam believes "there is a fine line" between OTT and just right. Some Guests even get in on the act and "play statues" to the promenade audience outside the lounge, where it is never curtain down, but curtain up 24/7:


"We had a guy sat here literally an hour ago. He was sat here having a cup of coffee waiting for his wife to come back from having her hair done. And he said the highlight was sat there pretending to be statue. You'll literally get a crowd of people out there trying to figure out who's real and who's not. They get so much attention I had to move them back. I only did it the weekend before."

Controversially, it was not long ago that Jake and Elwood were up for sale. Thinking that the statues would be misfits in the new look bar and lounge, the eventual decision was put in the hands of their Facebook fans, with a "stay or go" poll. Turning down an eBay offer of £950 was difficult for Adam, but needless to say an Italian restaurateur's loss is Blackpool's gain, once again.

Perfecting the curb appeal of Funky Towers, the establishment's sign recently hit the road to have two new additions: swirls bookending the lettering. Finding it difficult to find a North West sign manufacturer who "got" their vision, a supplier in their native Midlands was chosen to add the finishing, ahem, Touches. My personal bugbear has always been the tacky seafront signage in Blackpool, so it is great to see hoteliers like Adam and Becky setting such a great example for others to follow. I am not the fun police - and Blackpool still needs to retain its kiss-me-quick DNA -  but in my humble opinion the resort could learn a lot from the frontages of Llandudno and Southport. Nonetheless, there are some Blackpool exteriors that need singling out for being wholly visually appropriate:


Swiping away the need for keys

"It was just a case of right we're Funky Towers, what can we do ? Swipe cards - put it in your wallet. If you've got a family of five and the kids are a little bit older, need a bit more freedom, they can have their own keys."

One card. One front door swipe. One room swipe. One card electricity holder. All in all, one vision. Disney might call this "service debugging," and Pine and Gilmore, authors of The Experience Economy may see it as Guests "experiencing less sacrifice." Yet regardless of whatever you term it , three clunky pieces of metal have been substituted for a single piece of Access (almost) All Areas plastic.

A little stick for a Little Touch

In the hallway, an LT Classic in the form of free sweeties for all can be found. For more of a sugar fix, a stick or two of complimentary rock is regularly found upon Guests first entering their rooms. Adam explains that they have even looked into the possibility of venturing down the path of getting Funky Towers branded rock. This would go alongside some popular branded items such as polos, hoodies and jumpers. 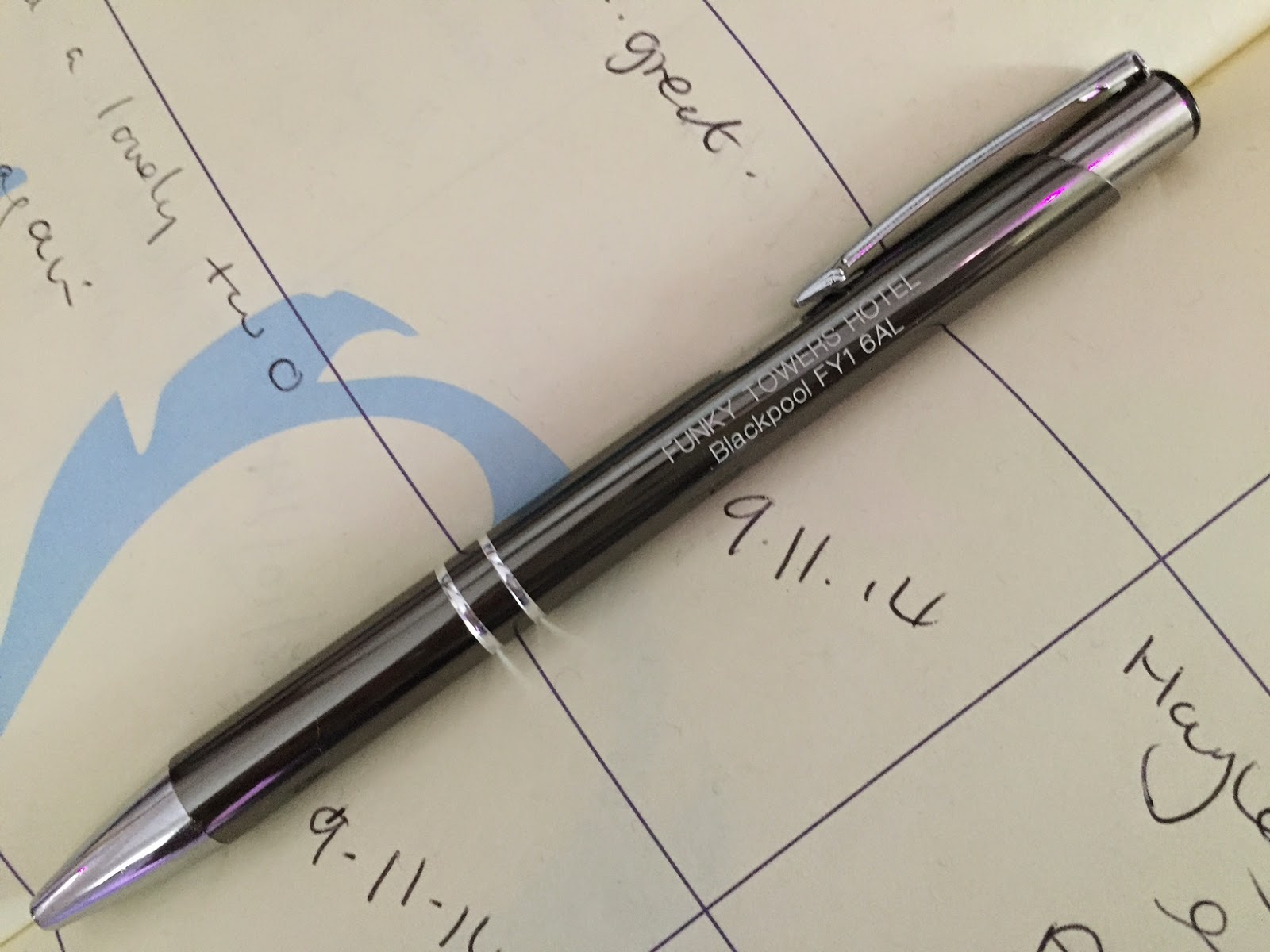 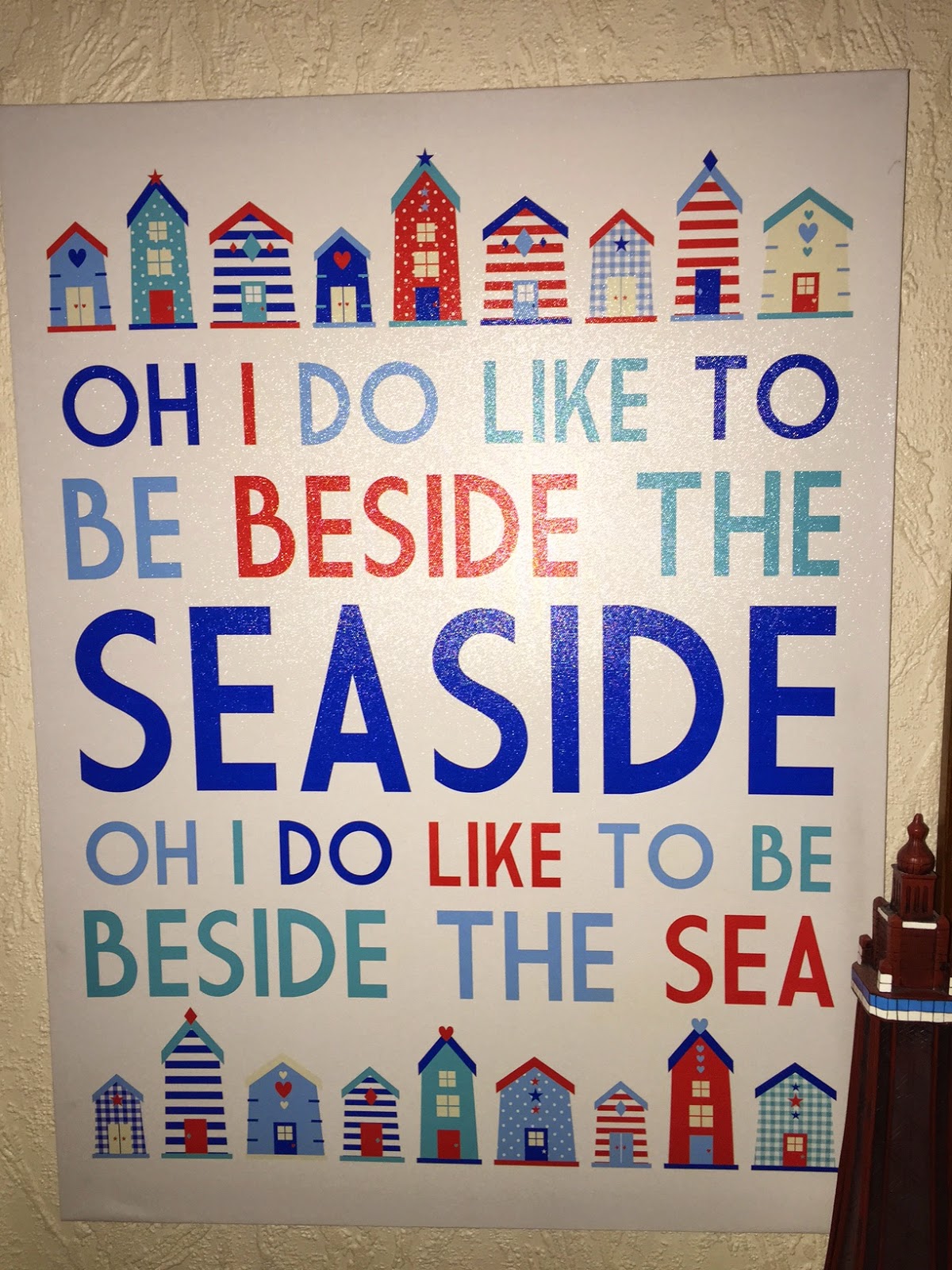 3,600 was the figure that Adam believed to be the number of places to stay in Blackpool at the beginning of the couple's tenure, with the number of accommodation options reported to now have dropped to around 1,700. Having spoken to many hoteliers in the resort since March, the 1,000 mark continually crops up. Indeed, on TripAdvisor, although the listings include some defunct establishments, the breakdown on the Blackpool page is as follows: 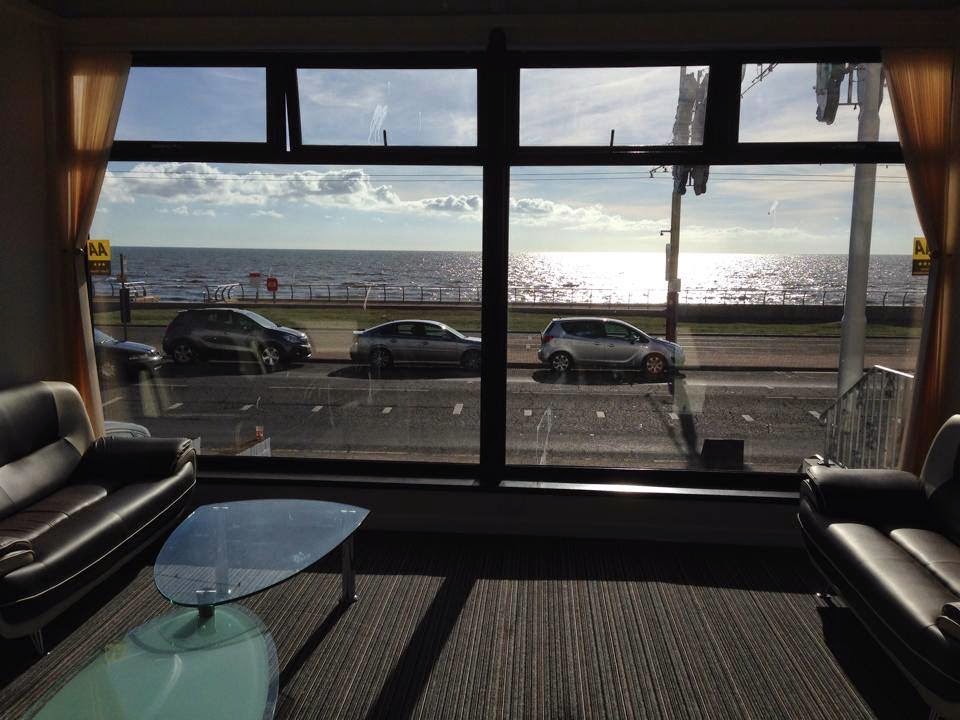 Ten gone in a flash

Adam declares that 10 years in charge only feels like 3 or 4. The busiest period for the Funky Towers runs April to November, as is the norm in the resort, but the couple are not averse to year-round opening. 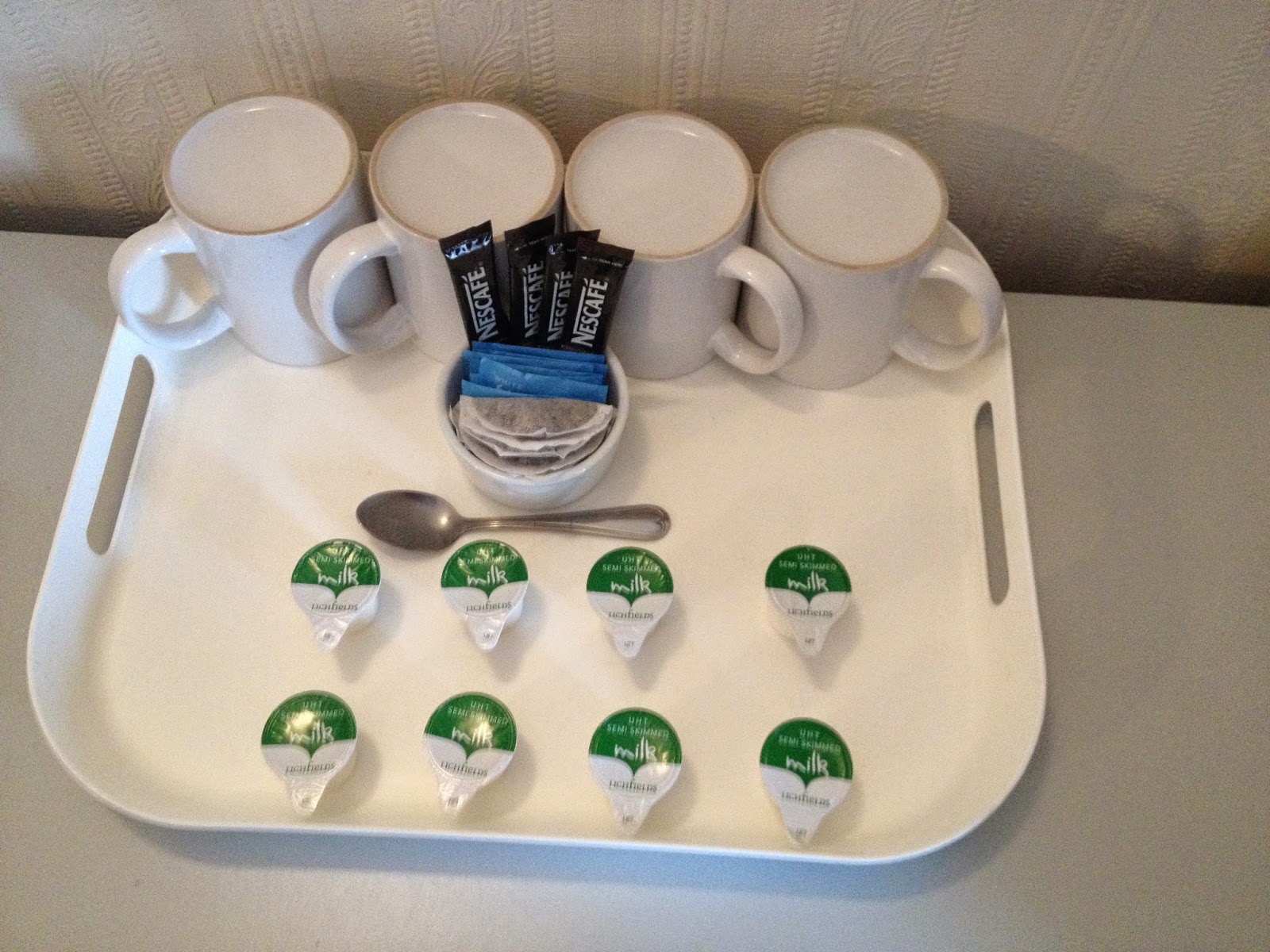 The one hour window for breakfast from 8.30 to 9.30 has been a mainstay of daily operations from day one. Neat towel sets on Guest beds have also been on the scene for over a decade, but the couple are unsure about straying into making towel animals. One formation that does seem to work well though is the interesting positioning of the UHT milk pots on the hospitality trays. Moving to another room, Guests had took it upon themselves to rearrange the dairy gang. 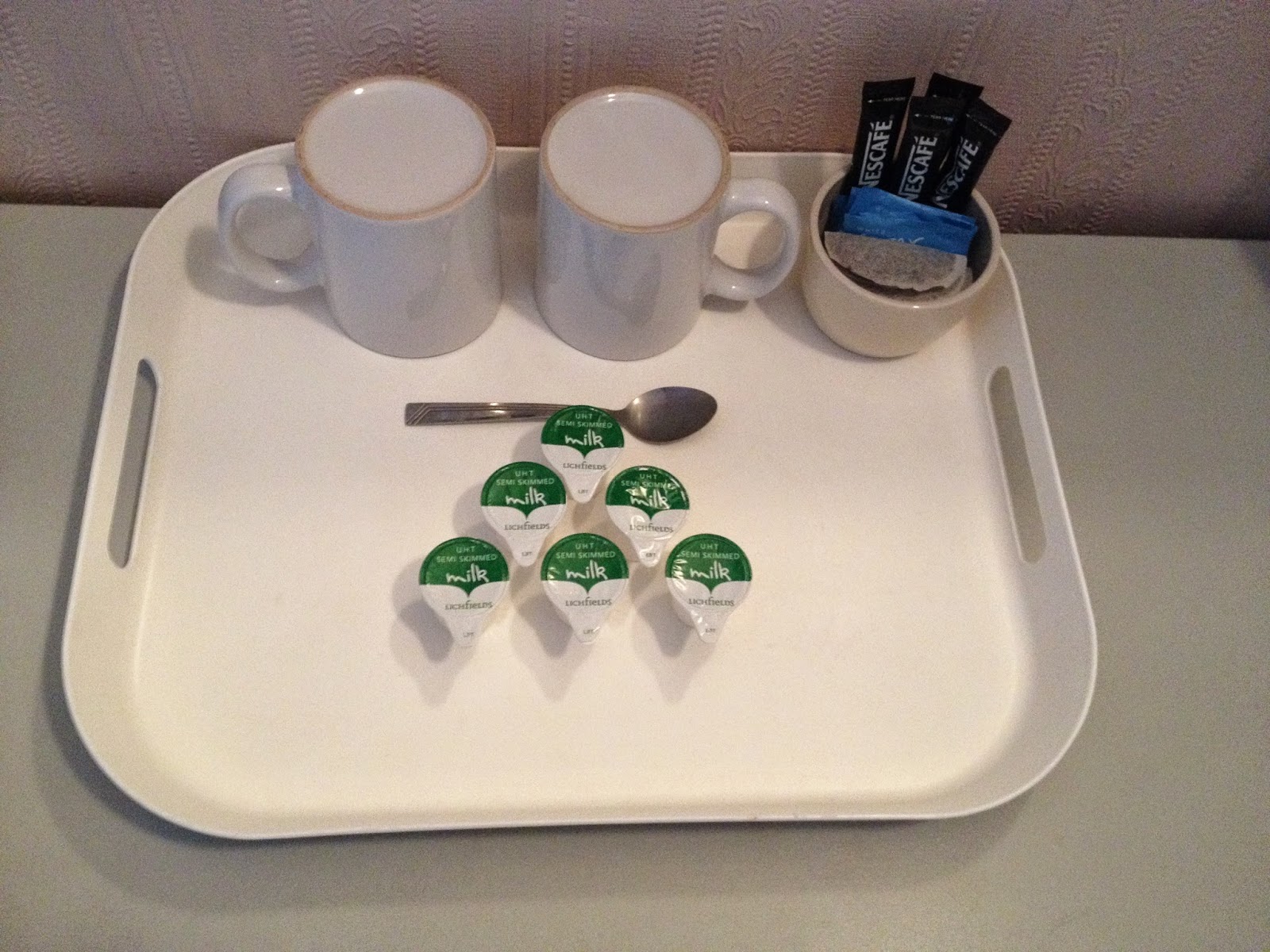 Guests staying at Funky Towers often enjoy their stay that much that they go one better than saying danke schon:


"Yesterday we had people buying me aftershave, Becky had a big box of chocolates. We had a chocolate Thorntons snowman for our little boy and then the week before an Oscar from Madame Tussauds for the best hotel in Blackpool - they had it [engraved] Funky Towers."

Glasses etched with Adam and Becky and gifts for their young children underline that Funky Towers is a real family affair.

Little Touches supported the 2014 Illuminations in our own small way which got the attention of both the Blackpool Gazette and Blackpool Council. We were the proud owners of a logolight at North Shore and are now setting our sights on being the headline sponsor one day !


Debate rolls on about the funding for the Illuminations, but equally controversial is the running period. The country's most popular TV show Strictly Come Dancing was in town recently, with the lights being switched off the week before they arrived. Indeed, it appears there's hunger for more than just one extra week of big bulb action, with Adam telling of "the amount of people I talk to that say they should be on until Christmas."

Recently I have witnessed the comment section on Blackpool Gazette's Facebook page turn into a de facto focus group for the future of the Illuminations. The best idea that stood out was from a gentleman who suggested trying to get technology powerhouses such as Sony and Toshiba involved. A tie-up with Sony in particular could prove lucrative, due to the film division including Columbia Pictures.

Ultimately, children's TV characters and other elements come and go in the 6 miles long display, but Mr Lancaster remarks:


"That's the good thing about Blackpool, every year it just reinvents itself, and yet it's still got the backbone of the classic resort that everyone remembers as a kid."

They need you, you, you

To see a young couple like Adam and Becky putting their heart and soul into their property spurs me on in my mission to assist B&B, Guest House and Hotel owners to make the most of their establishments and give them the gentle creative nudges needed to survive in a crowded marketplace. Please join me in raising your fedora and shades to Funky Towers: an honest, friendly, bluesy place to stay beside the seaside. 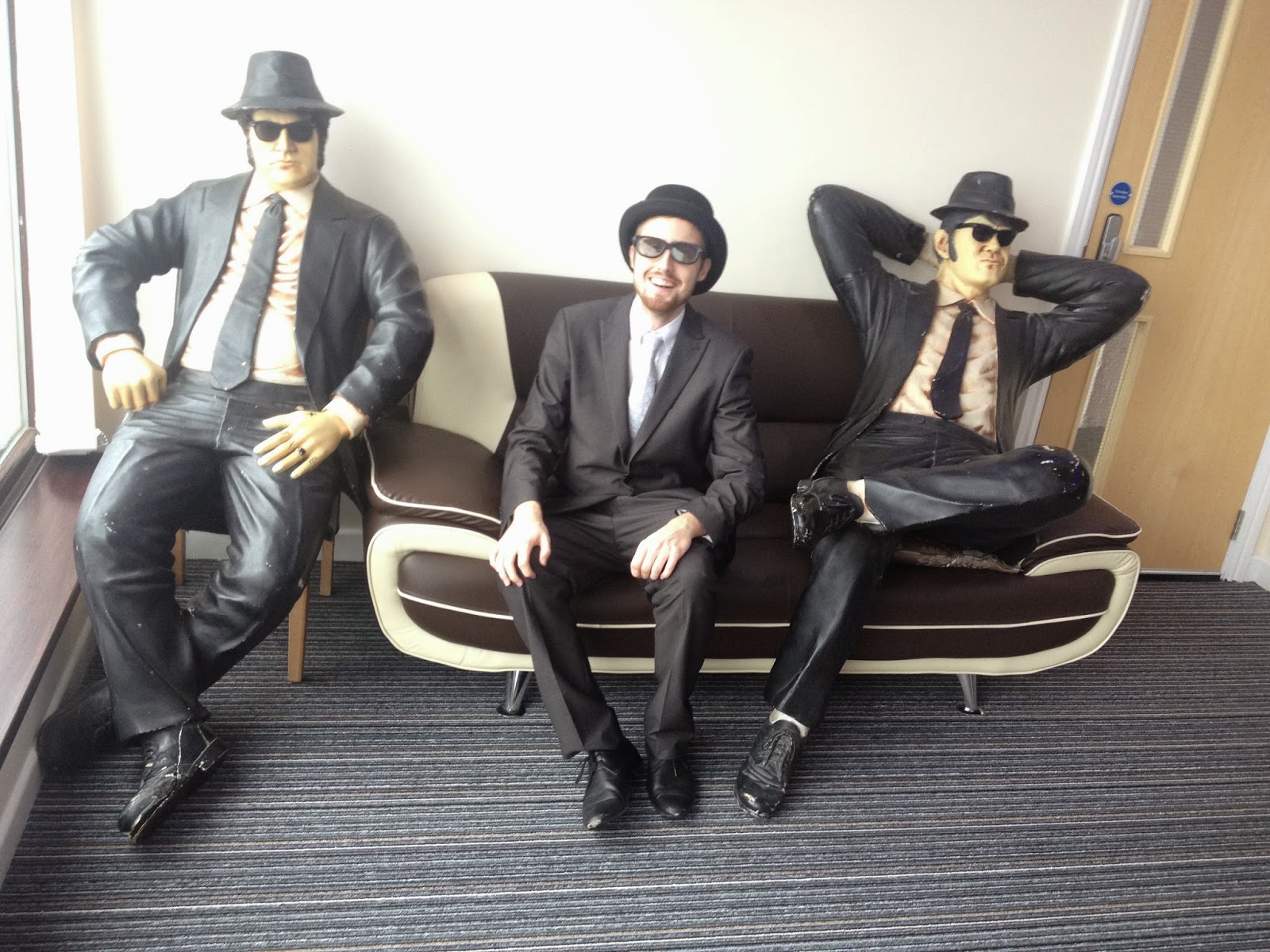