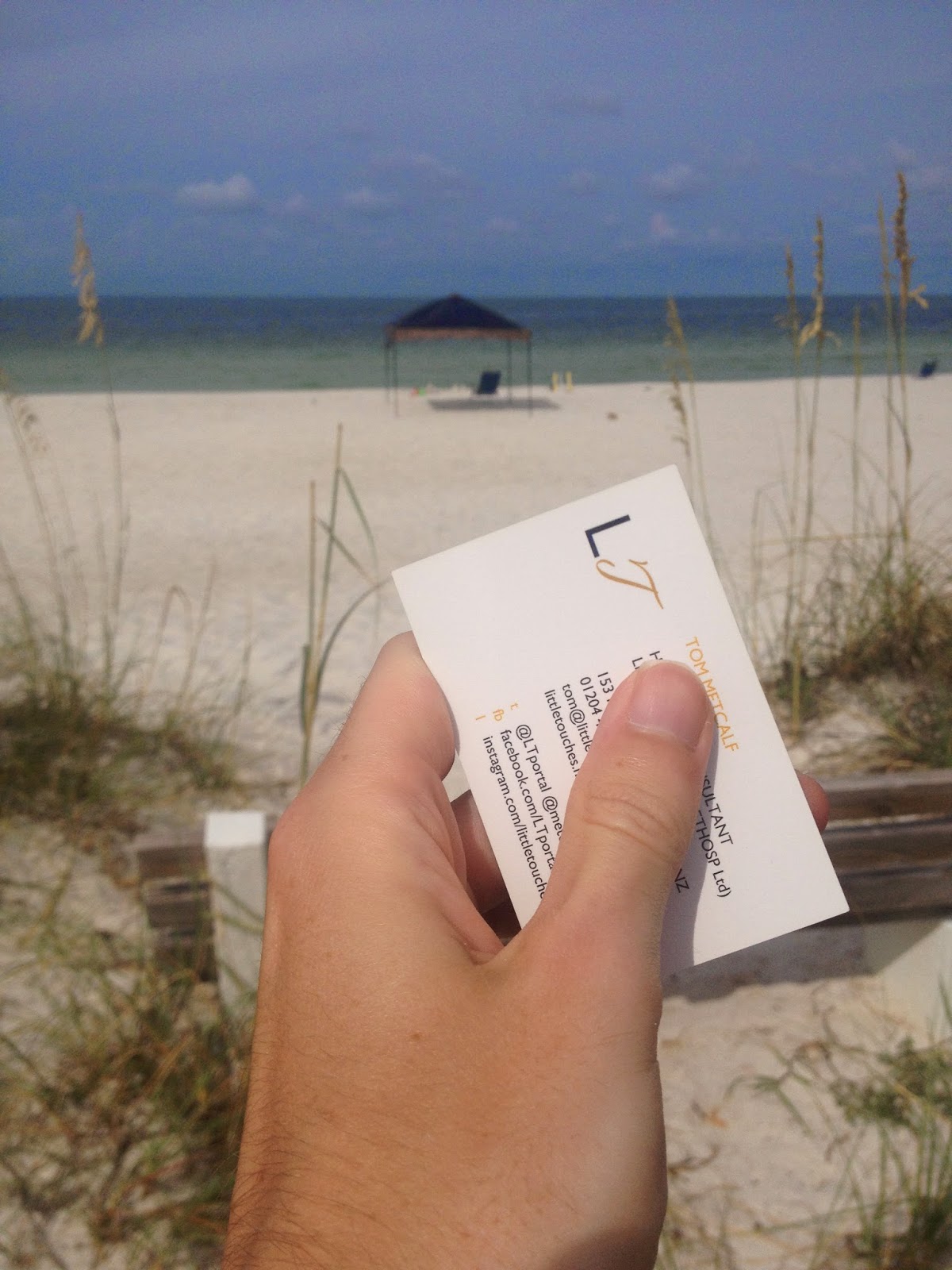 I first stepped foot in Clearwater's clear waters way back in 2003, when the Metcalfs were lucky enough to spend the second week of our holiday in the resort after losing our Walt Disney World virginity. Back then it was a cool beach place, and over a decade on it is even cooler. Although naturally, the same adjective can't be used to describe the temperature.

Hefty landscaping expenditure has paid dividends, in particular along the rear of the beach. Investment from hospitality heavyweights includes the anchor of Hyatt Regency Clearwater Beach Resort and Spa and a major renovation from the historic Shephard's Beach Resort. A tourism utopia to see public and private sector monies working together to benefit all who live, work and sling off their sandals in Pinellas county. 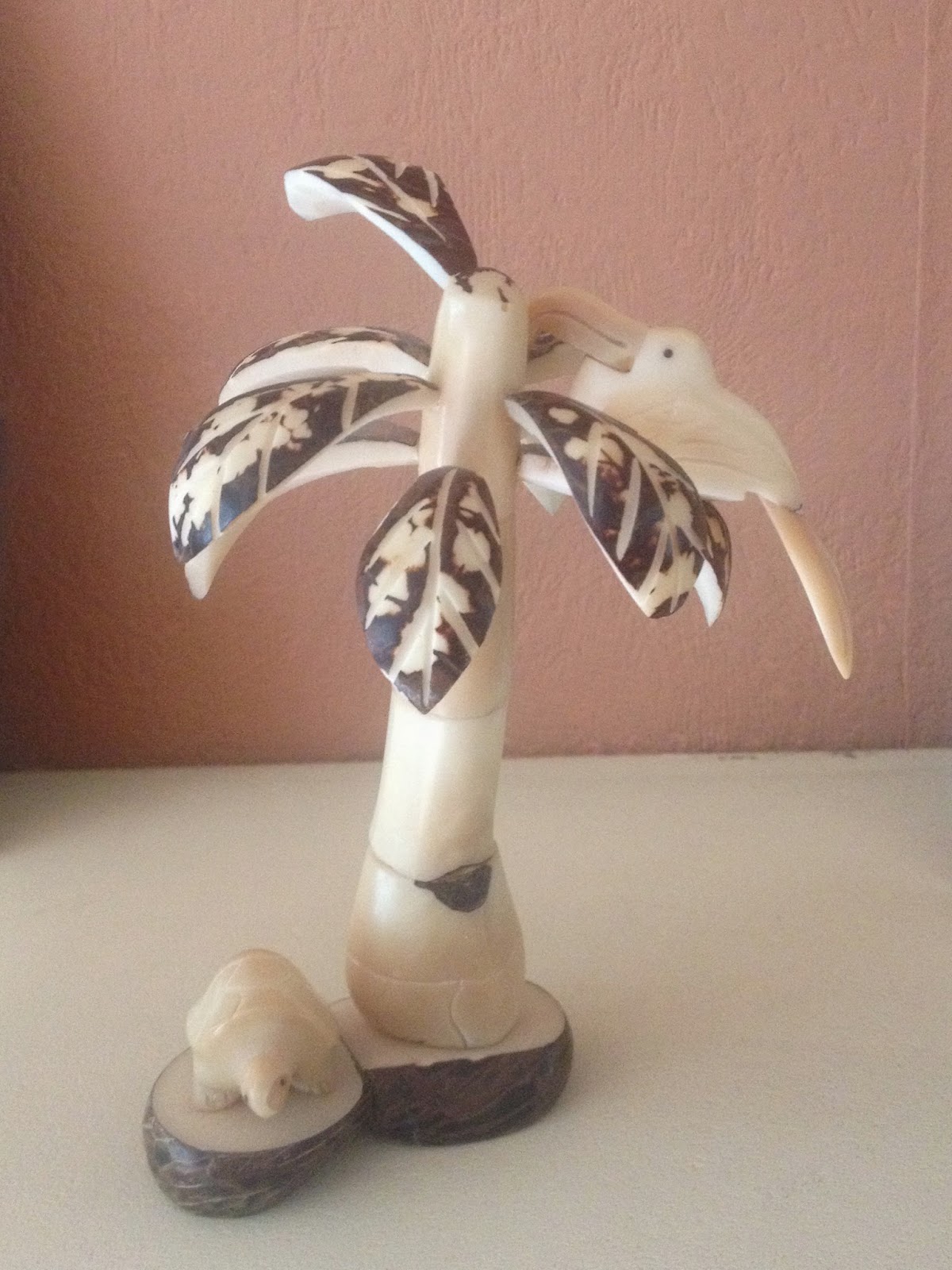 Pier 60 at night still has the same hustle and bustle feel to it, with micro businesses doing a roaring trade due to "honeypot" footfall.  In 2003 we purchased an exquisite macadamia palm tree ornament, which still adorns our fireplace to this day. This time around though the nutty seller was nowhere to be found, yet still, there's high quality craft stalls a plenty.

Returning to the foot on the pier, an exceptionally talented gentleman who makes spray paint sunsets was one of the many crowd pleasers. However, the biggest swarm of metaphorical bees to metaphorical honey was reserved for a man with a mic. The master of pieremonies was getting members of the public to "show us what you're working with" by dancing to Right Said Fred's I'm Too Sexy.

In my line of work, a holiday is never passive but - quite rightly - actively sees me being a sniffer dog wherever I go to root out hospitality operational and Attention To Detail excellence. Staying at the Clearwater Beach Hotel I was pleasantly surprised to find several LT Classics. Despite a low room rate for two nights, and the layout, i.e. motel style entrances, this establishment was still putting up an ATD fight.

Towel origami was hanging in the bathroom with a simple flannel concertina positioned in a makeshift pocket. As Neil Buchanan used to say on Art Attack "try it yourself"...by clicking here to see a demonstration by YouTube's The Staging Trainer of what she terms the "accordion pleat." The sink area also saw quality toiletries placed on a bed of the same creases. Beach Mist for the Clearwater Beach Hotel. Elsewhere in the room, a notepad and pen was provided on the bedside table (albeit unbranded) and the housekeeper was trying to gain tips with a quick scribble on an envelope. 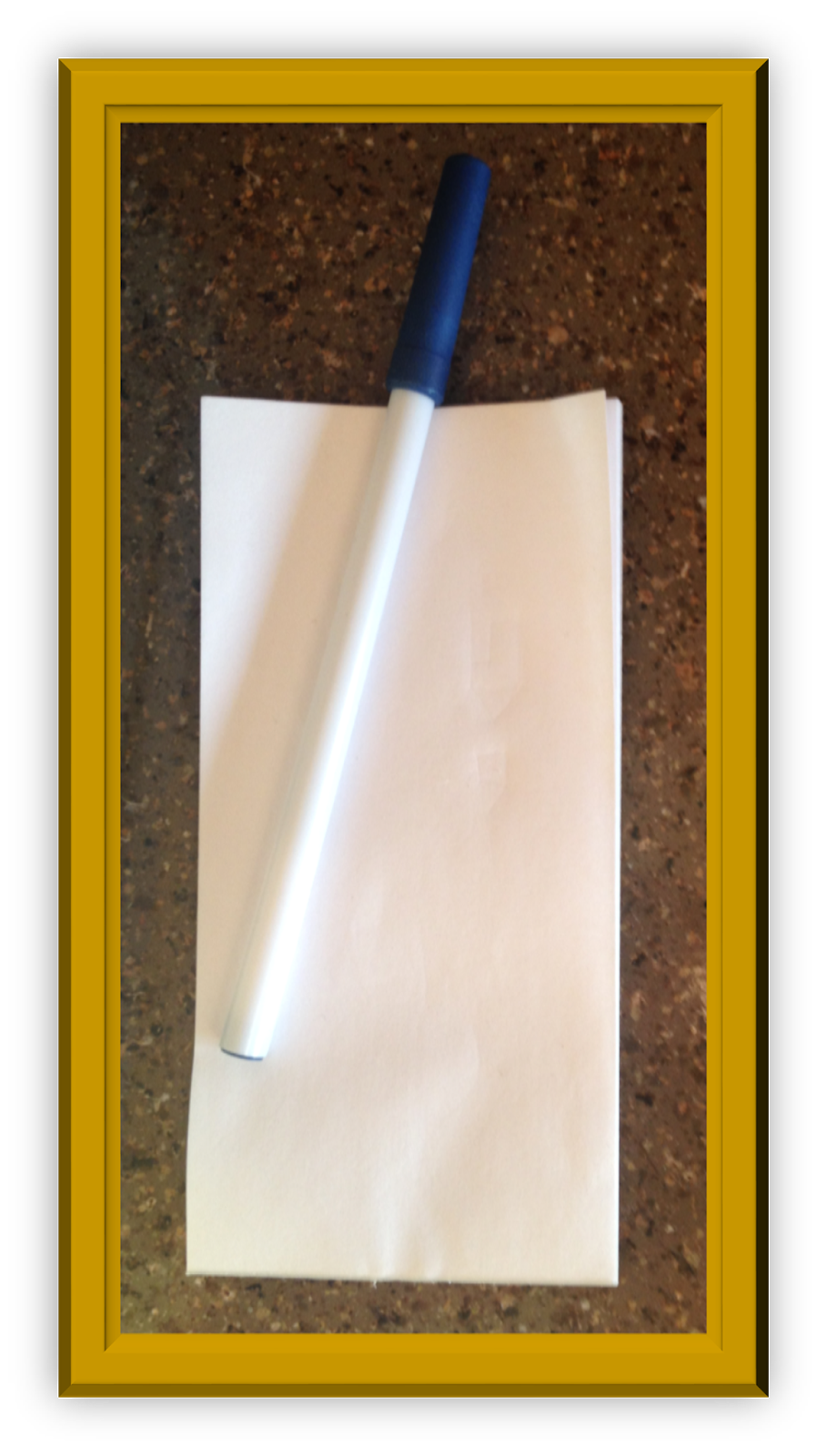 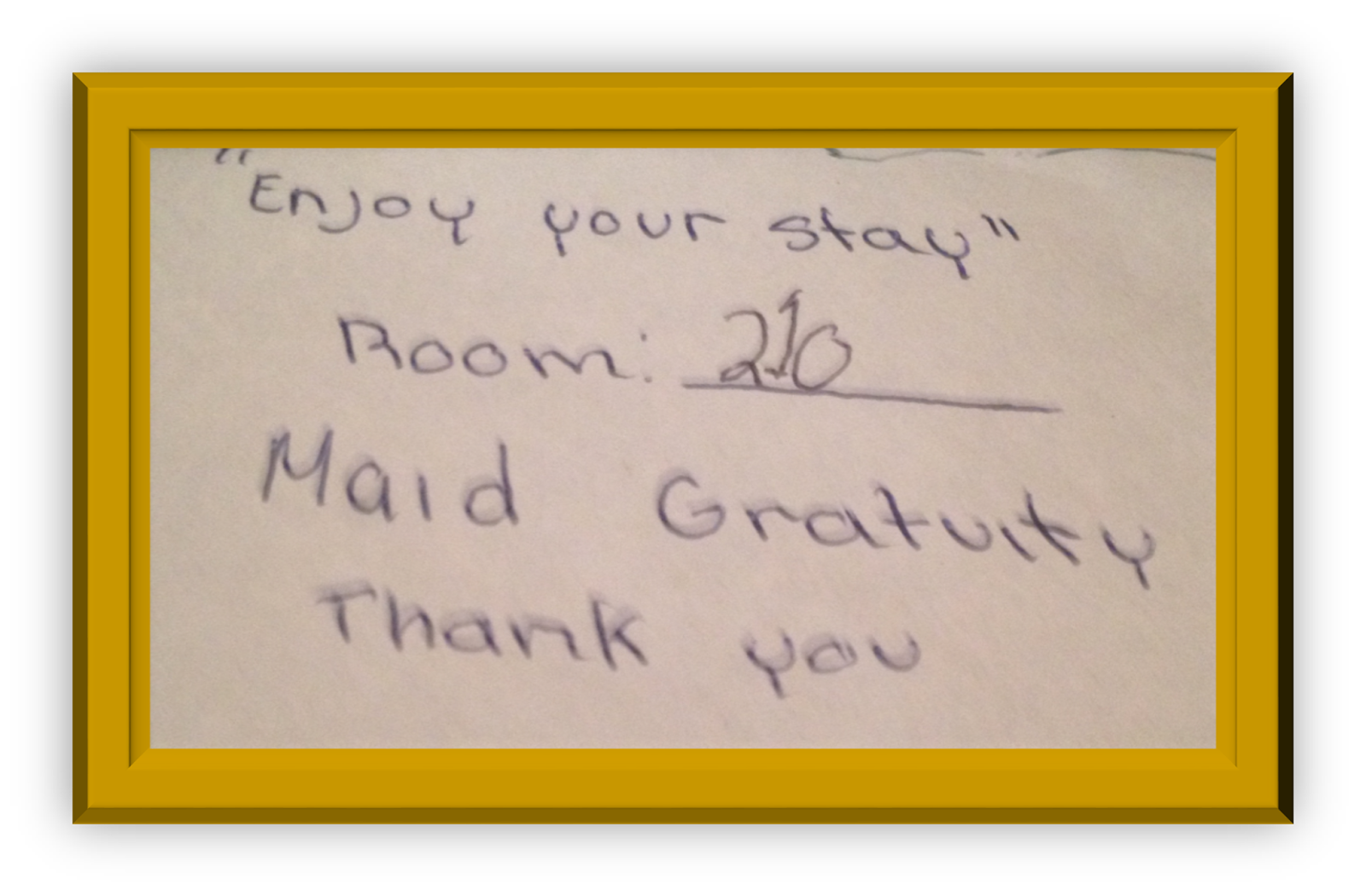 All these long-standing industry points of difference are not even so much as hinted at on the Gallery page of the establishment's website. Consequently, the oldest trick in the hospitality rule book is at play: exceeding expectations. Yes the housekeeper's handwriting isn't the best and yes the pen and paper are incredibly basic, but at least they are still there. Clearwater Beach Hotel knows it can never compete directly with its plush competitors due to their building's structure, i.e. no Olympic sized pools or fancy Spas, but at least they are doing something, rather than nothing. The Front Desk even had unlimited free (branded) postcards to share where you are staying with friends and family back home.

Our 2014 hotel was located exactly opposite our 2003 abode. Only now, the Ramada of 03 had become the Holiday Inn of 2K14. Times change, things change hands, however the International House of Pancakes (IHOP) was still standing.
Well-designed syrup dispensers are clearly a natural fit for a pancake specialist and an obvious signature Touch. Returning the next evening, but this time for dinner, not breakfast, I was reminded of something I had seen before, but not really thought much of at the time. Three soft drinks were served to our table, all with mini paper toppers on the straws. Condoms for cold ones or protectors from pathogens ? This is not just a state-wide phenomenon, but a nationwide one, that has been gaining ground internationally. "Your drink has not been sipped by another human being" is the subliminal message, so clearly a hygiene and aesthetic Touch, which I have to admit, I rather like. Existing resources are being used by means of the hallmark of Little Touches: both logic and simplicity colliding.

Anna Maria Island Accommodations provided our home for the next 14 nights: Tiki Time, a near-beach self-catering bungalow. AMI Accommodations are a prime example of a business that takes hold of its brand identity with both hands and exploits it in the most sincere manner. Flip-flop logo which has led to flip-flop keyring and flip-flop stationery, in a flip-flop stamped bag. 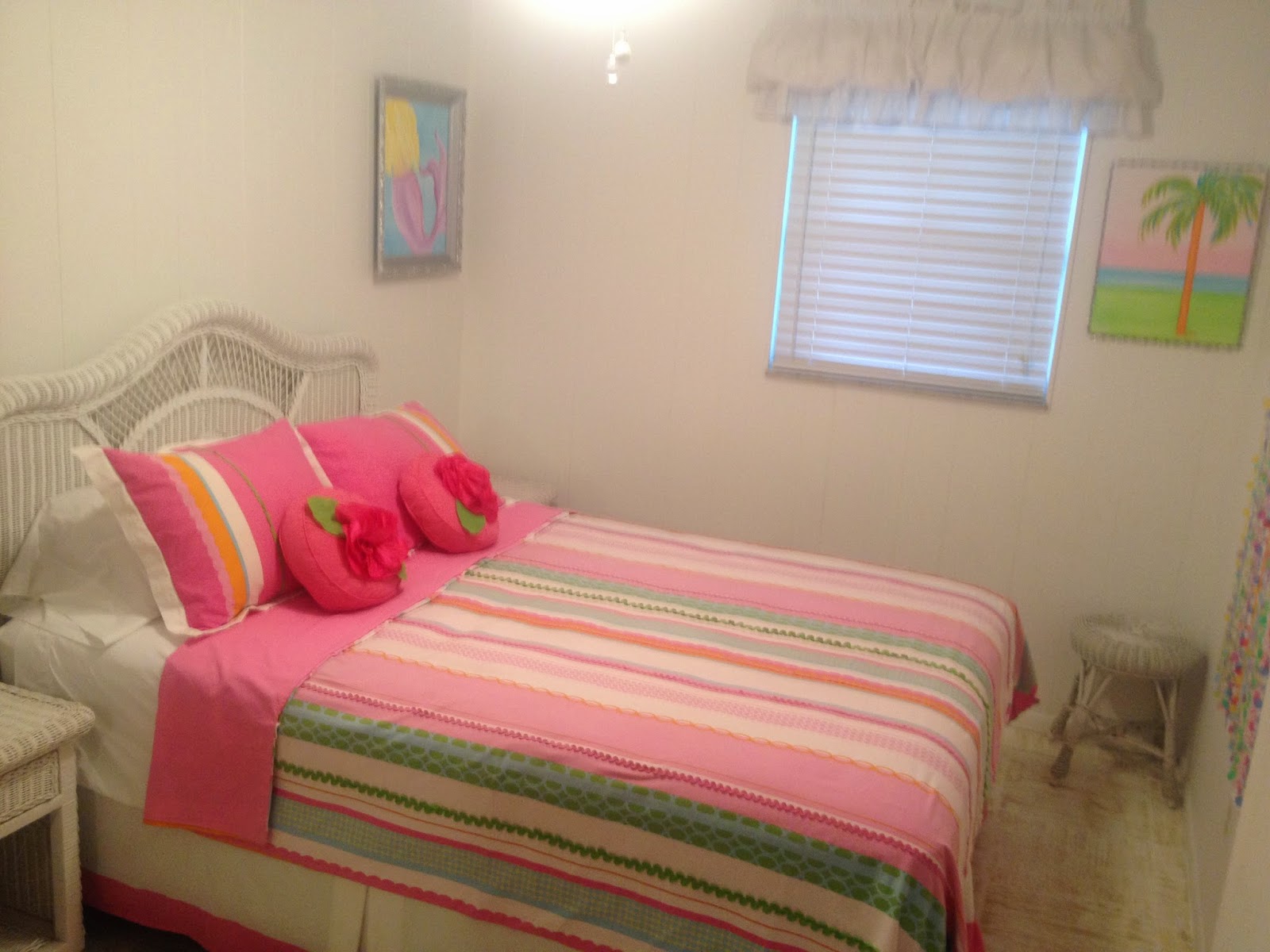 Nonetheless, the attention to detail was not restricted to the welcome pack. Venturing into my room, it was clear that for this trip I was going to become a little princess, given the pink accents I was met with. My travel companions found themselves in a safari themed room, reminiscent of how the rooms at Animal Kingdom Lodge are decked out. Disney's AK Lodge formed part of my university internship, but the nitty-gritty of that's for another post ! 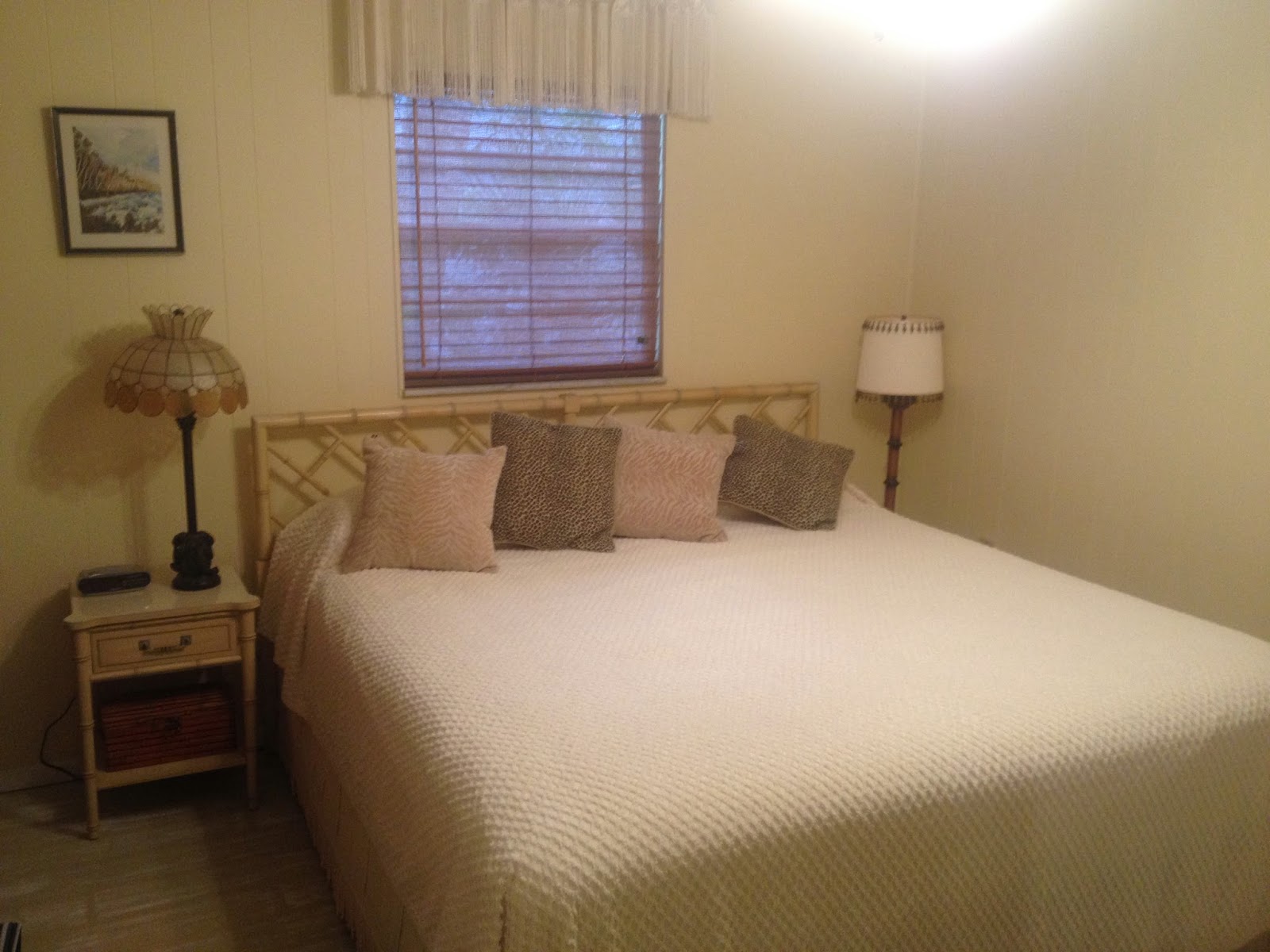 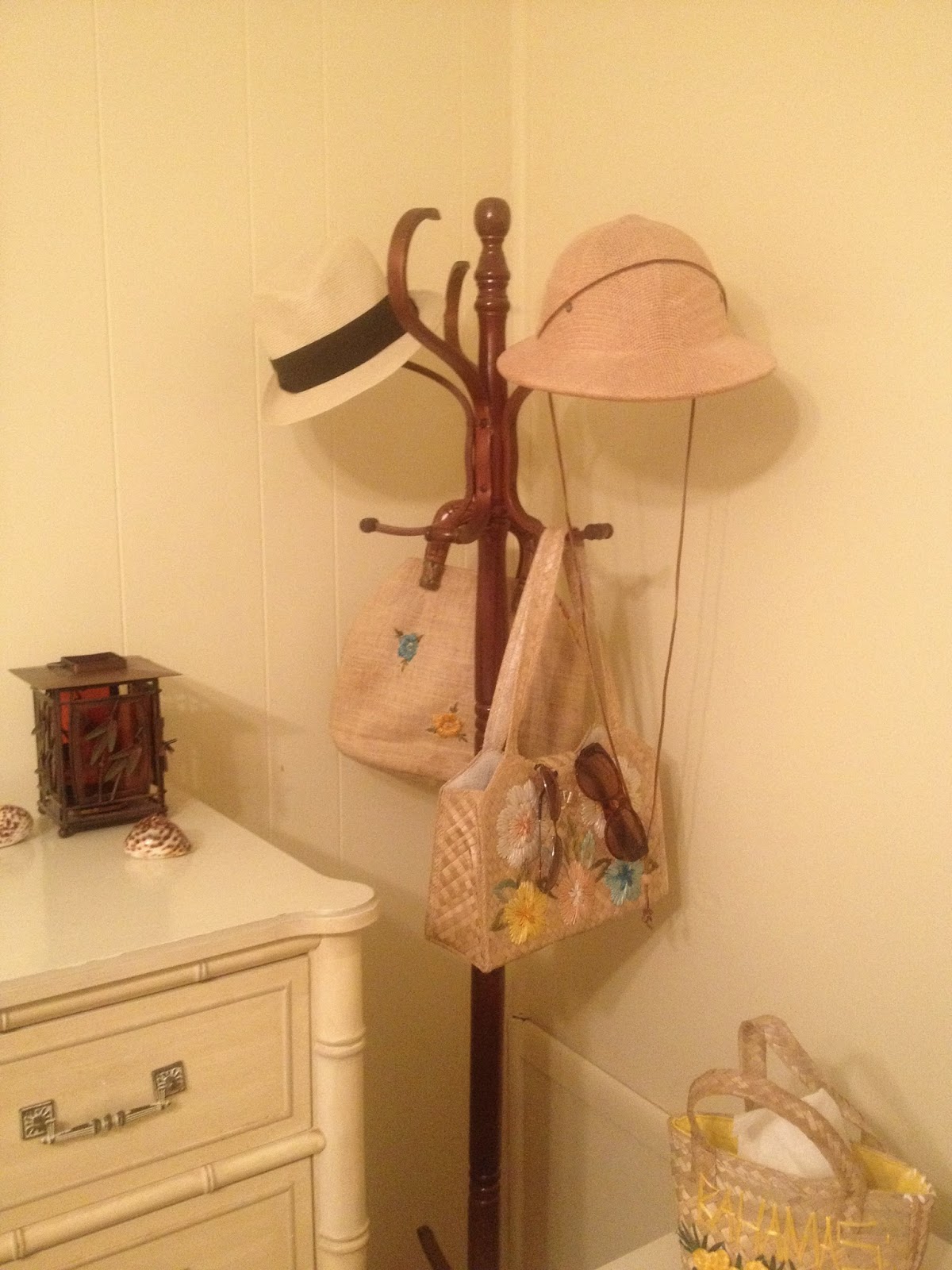 A three-pronged attention to detail attack was used in the laundry area: pastel coloured sign, net curtain ties with similar outbursts, before being presented with a stack of towels drawn from the same palette. The bathroom featured a Little Touch that is practical personified: a sign advising that make-up should be removed with the black washcloth provided. AMIA is clearly OCD about ATD. A pile it high, sell it cheap supermarket giant like Walmart may not be inextricably linked in most peoples minds to the type of things that are discussed on our blog. However, their "wet umbrella bag" is still profoundly useful to shoppers. This Little Touch has also been spotted at doctors surgeries, with an obvious motive of reducing lawsuits from people slipping on respective floors. Dispensed at the Bradenton Walmart store via a classy gold stand, the retail titan commendably declares "For your safety and convenience."

Whether or not this Touch makes an appearance at the Walmart owned Asda in the UK, remains to be seen. Owing to the "double whammy" of less people ending up on the floor and happier, drier shoppers and shopping, to me it seems like a no-brainer.

When it came to mealtimes, I made a point of returning to icons of American hospitality such as Denny's , Bob Evans and Applebee's. Love them or loathe them, you can't ignore them, due to the sheer number of mouths they feed on a daily basis. 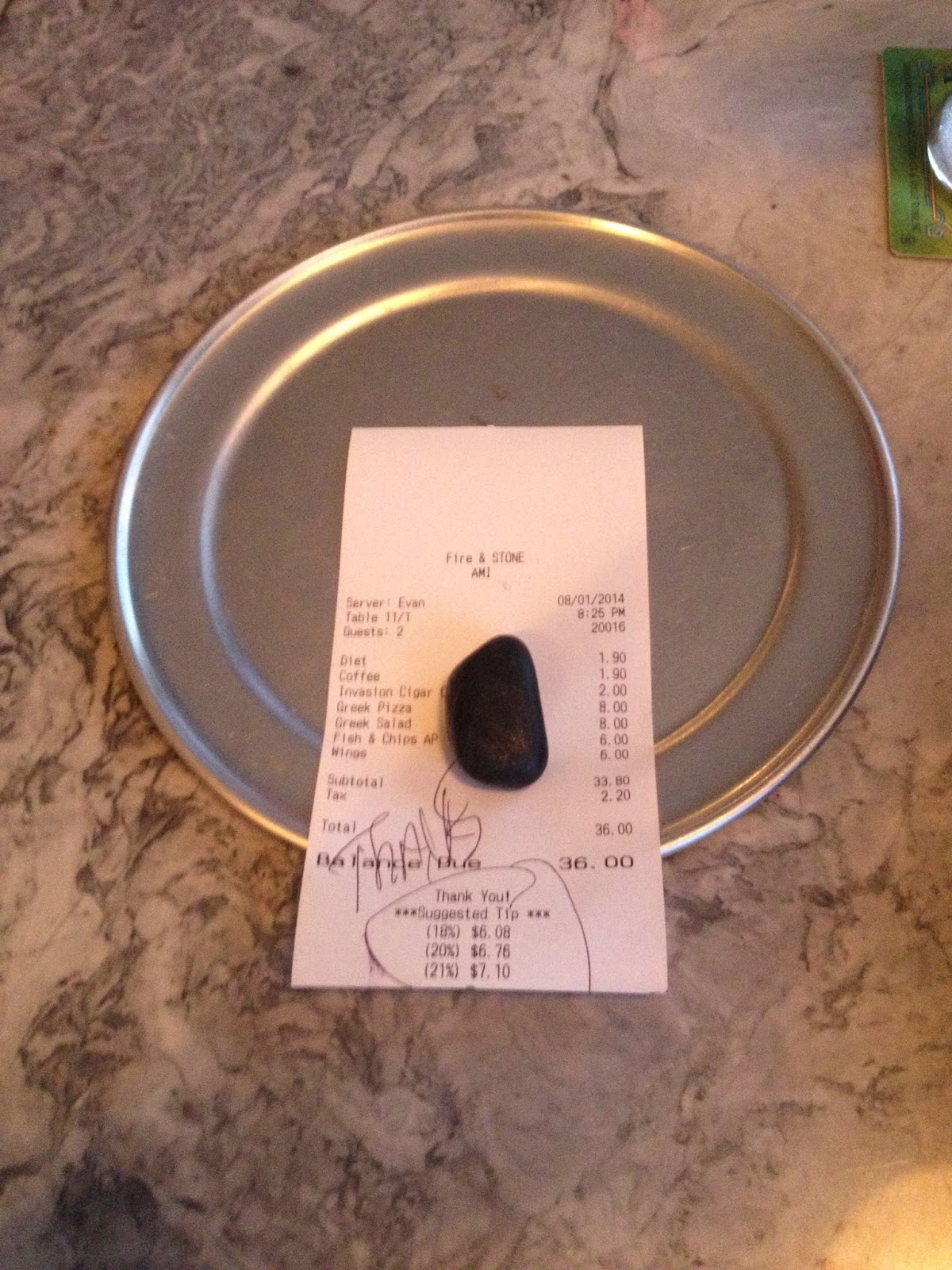 Special mention goes to Hurricane Hank's with their delicious Fish Tacos and new kid on the restaurant block, Bradenton Beach's Fire and Stone, the second venture for the business after a Cortez village first. Fire and Stone attained a wise bill point of difference : paper bill on a silver plate, restrained by a small stone.Plus, the reappearance of the paper straw topper was to be found both there and at Anna Maria Island's Harry's Grill.

Dare I say that we saved the best until last ? The invitingly titled eat here was the name, hospitality excellence was the game. The wooden clipboards given out to display specials and drinks was the only blip in my eyes, given that they had their stationery supplier's name boldly embossed on them.


That aside, our waitress came and started off the evening by greeting us and removing the neatly wrapped napkins from our "cute" water glasses and filling our little cups right up. Some have criticised this kind of practice as a b******* production, but I am a big fan of a sense of theatre in hospitality environments, so it worked for me. Also present on the table, a congestion-free salt pot: no more clogs with standard items in a different context. TPA to IAD to MAN

I have to admit, Tampa airport really pleasantly surprised me. Its outbound terminal is a genuine triumph for the design of public spaces. Little Touches here were a little techie, as both the stool tables and the tub seat joiners had both traditional power outlets and USB sockets. 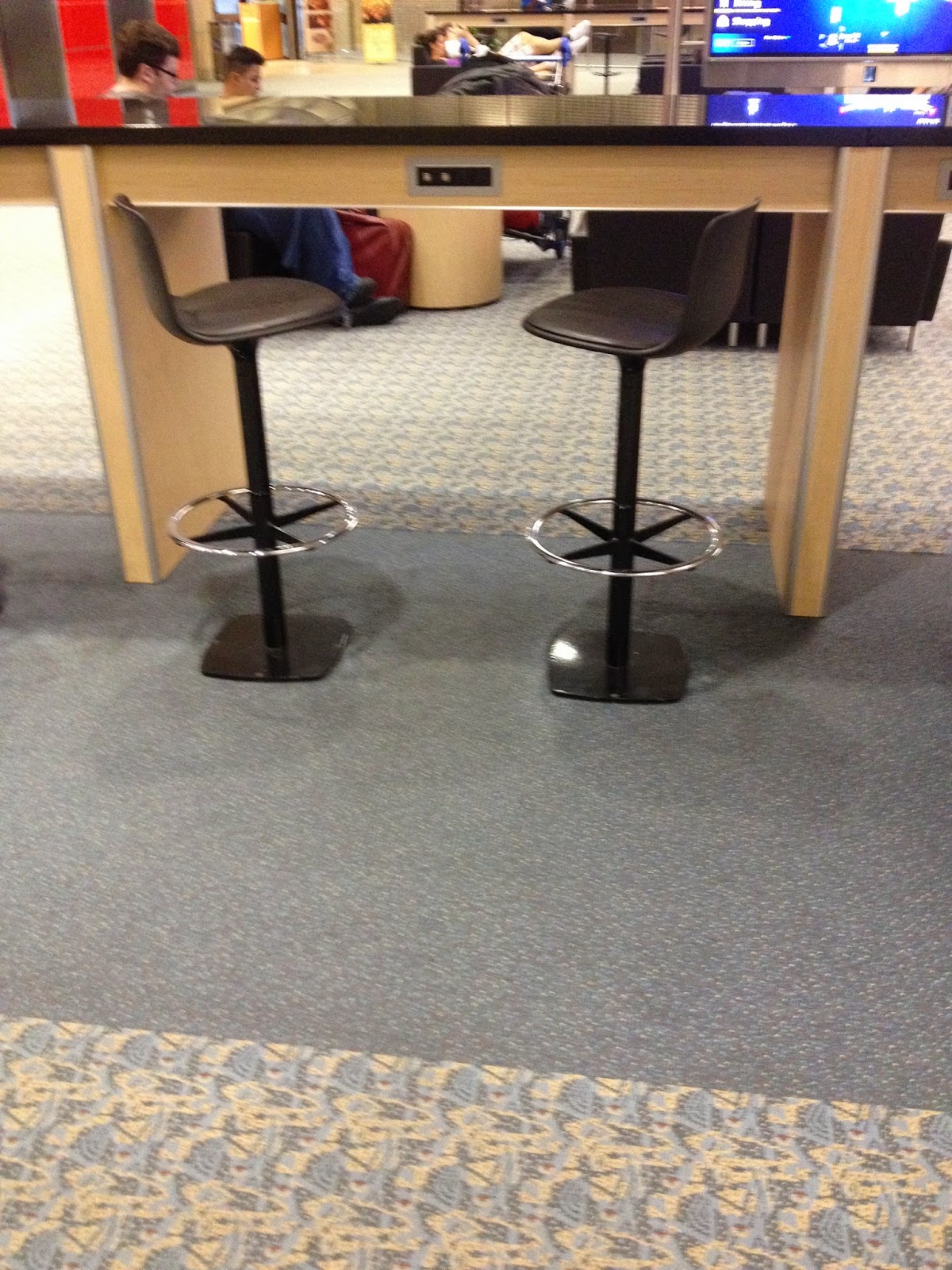 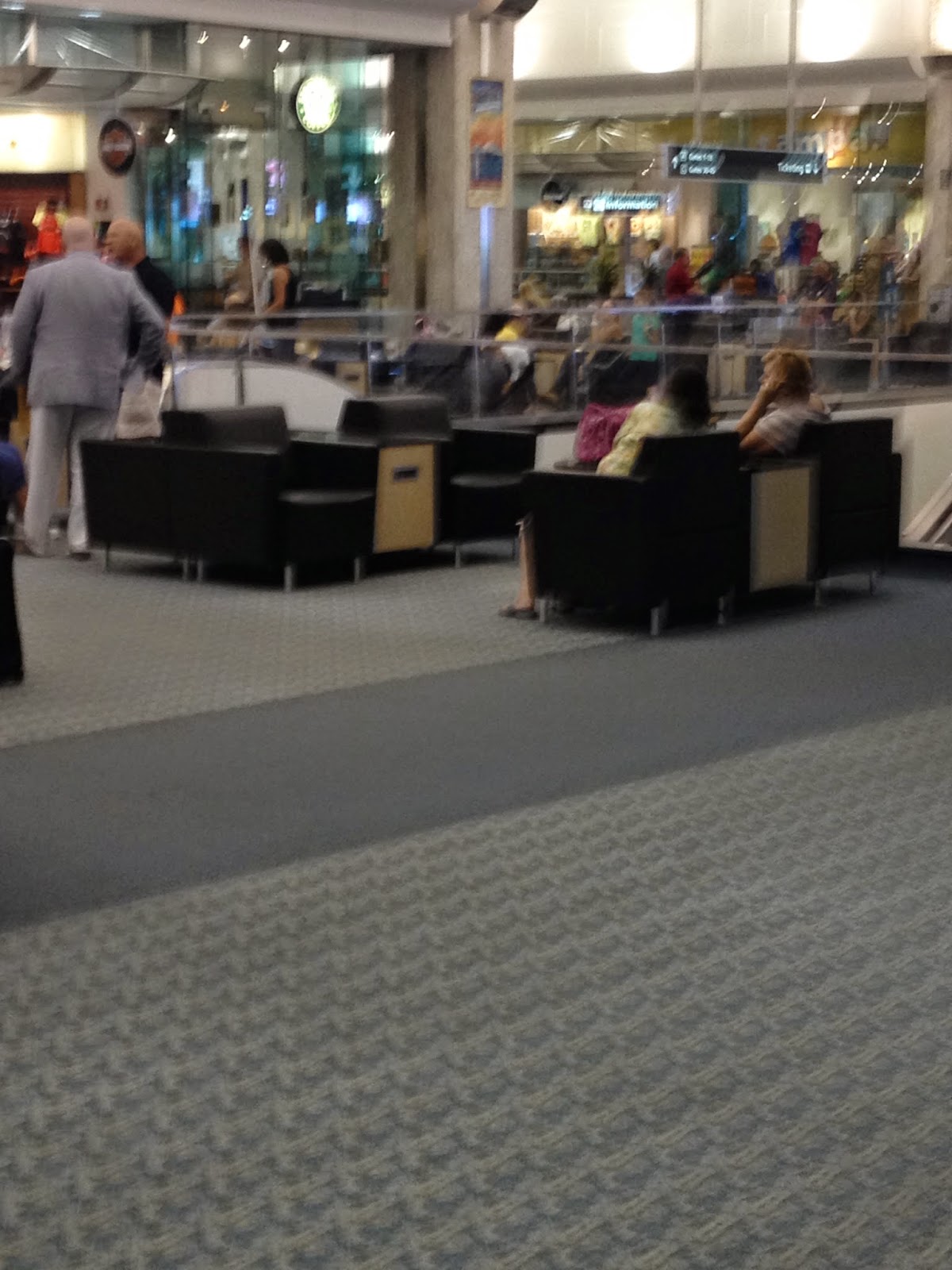 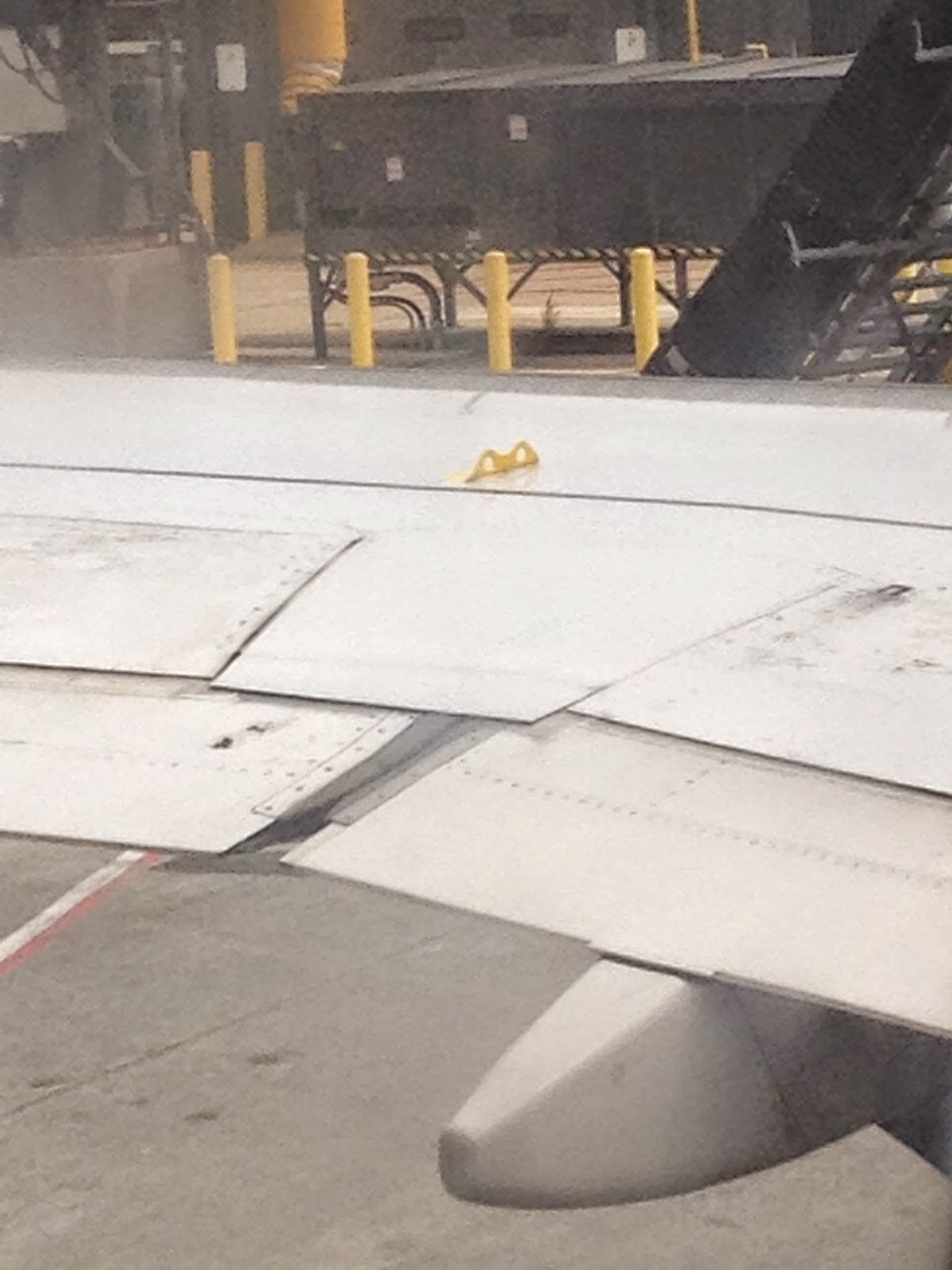 Onboard to Washington and it appeared that our plane had been sponsored by McDonald's, given the presence of what appeared to be one of the fast-food behemoth's Happy Meal carry handles on the wings of the plane. Touching down at the capital, my longest journey by foot in an airport was brightened by a wall of colour. A wall of glass blocks, with coloured lighting tubes behind, achieves a great effect. We have the same glass blocks separating our living and dining room, only without the snazzy lighting backers. 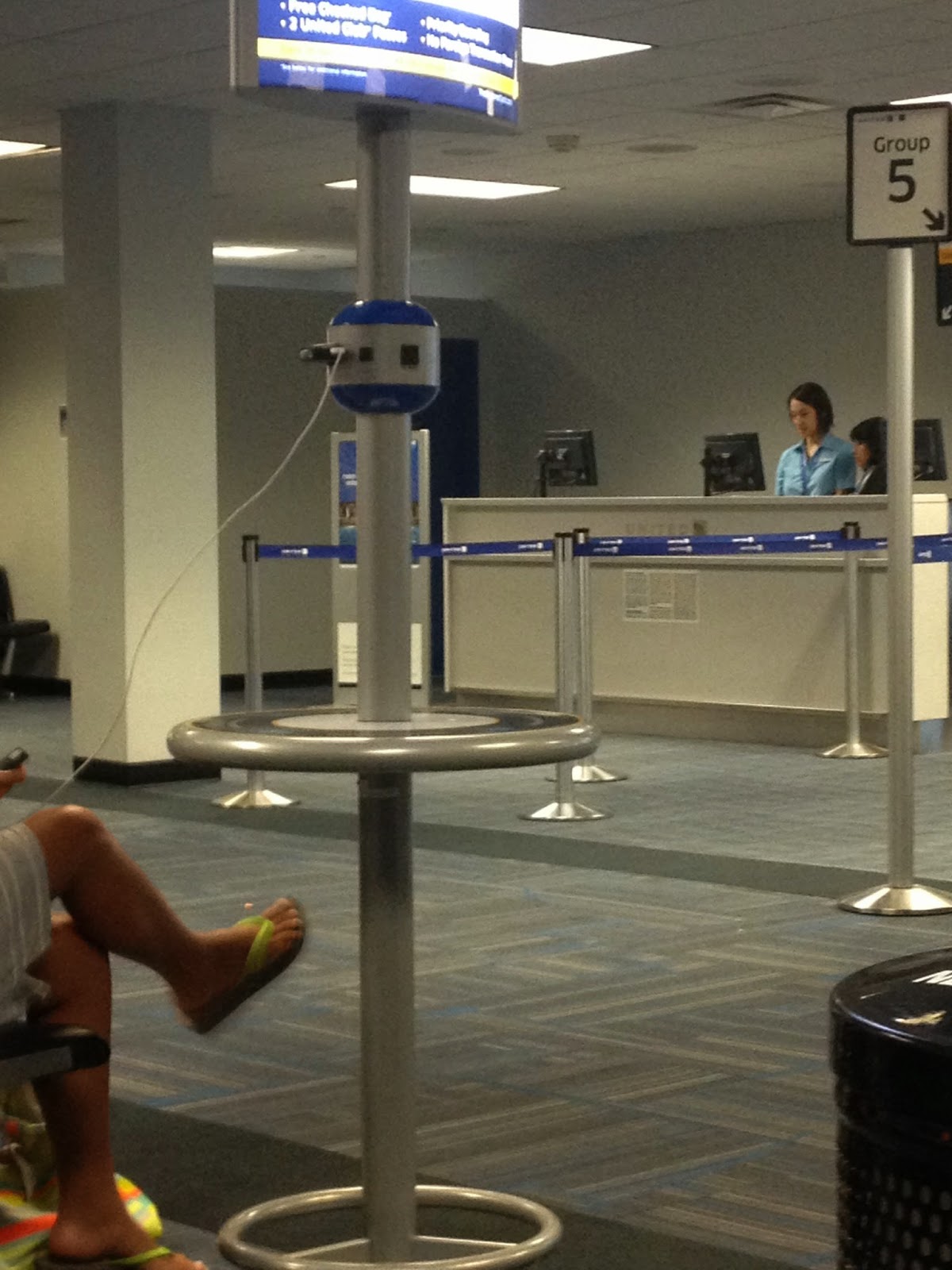 Washington Dulles did have the complimentary power outlets too, albeit in a less slick form than Tampa airport's "juice boosters." Yet at least passengers still had the opportunity, rather than being met with charging nonentity. Once again, a case of algo es mejor que nada.


Florida's Gulf Coast is as packed with quirkiness as it ever was. Long overshadowed by the action packed Orlando, I urge you to give it a go, whether doing a week at the "parks" first, before a week of beach larks, or spending the Alpha to Omega of your 'hols on Florida's wonderful west. The attention to detail you'll find ranges from understated to overstated, but that is the fun of this carefree, caring part of our world.

I invite all our loyal readers to tell us your take on this latest Touches on Tour entry. Please comment below, Tweet us @LTportal or say hello by any other means of your choosing.