We are very pleased to feature Room Four Dessert as our first Attention To Detail Superstar. Little Touches is a Bolton-based business, so it was great to start our ATD Superstars series with just a five minute drive from our HQ. Hospitality excellence on our doorstep.

Room Four Dessert is the brainchild of friends Asif Timol and Salman Bariwala. They met at The University of Liverpool, when studying Law and Genetics respectively. Although those subjects are not the most likely of breeding grounds for a hospitality business, Salman inheriting a bakery in 1999 and Asif’s passion for food provided a strong foundation for what was to come. 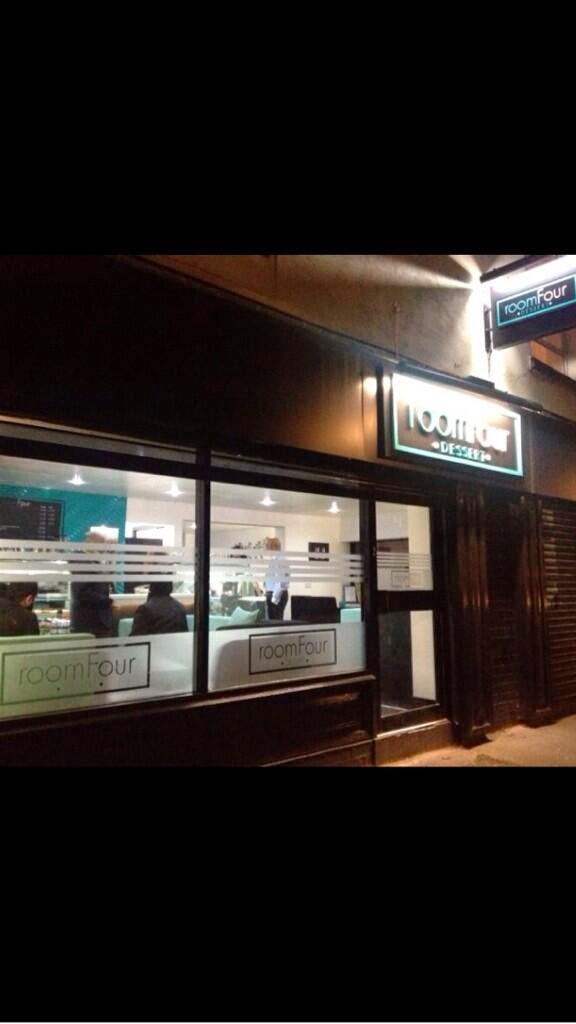 An empty unit at the bottom of , one of the town’s main gateways, proved too appealing to turn down. Opening their doors for the first time in December 2013, just mere months later and queues outside the door are not a weekly occurrence, but a daily norm. Salman admits the success of the venture “has taken us by surprise as well,” with Asif adding that the overwhelming achievement of the business “is a nice problem to have.”

Salman concedes that along the way there have been “tantrums and tears,” with the two entrepreneurs sometimes frustrated by uncertainties when dealing with third party suppliers. Indeed, such is their commitment to attention to detail that they delayed the opening to make sure all the t’s were crossed and i’s were dotted.

The mass market appeal of Room Four Dessert is evident.  Asif explains “you get different crowds throughout the day,” specifically, weekday afternoons there is a natural bias towards the student population, and that is before you even get to the local residents, many of whom are already highly loyal to the venue. Undeniably, this is reflected by the vernacular by which many of the brand’s keenest ambassador’s refer to it as simply “Room Four.” Yet keen to attract an even broader Guest base, the duo have recently joined The Best of Bolton, which champions quality businesses from the local area.

When questioned about their flair for attention to detail, Salman confesses that it is often an instance of keeping your eyes and ears open: “It's a case of being inspired by what you see and wanting to put your own spin on things.” However, they see the end result as “somewhere that is done to our taste, our spec” without ever being a carbon copy of anything the high street has to offer. 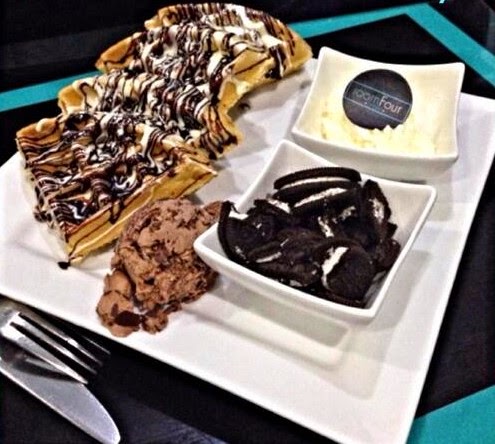 When confronted about the “big boys” i.e. national fast food chains just around the corner, Asif points out that although Room Four Dessert is essentially a coffee shop, because of the exceptional dessert roster the competition is less direct. In particular, waffles are singled out as a bit of a hit, with coffee in a coffee shop being outshined by the sweet treats. 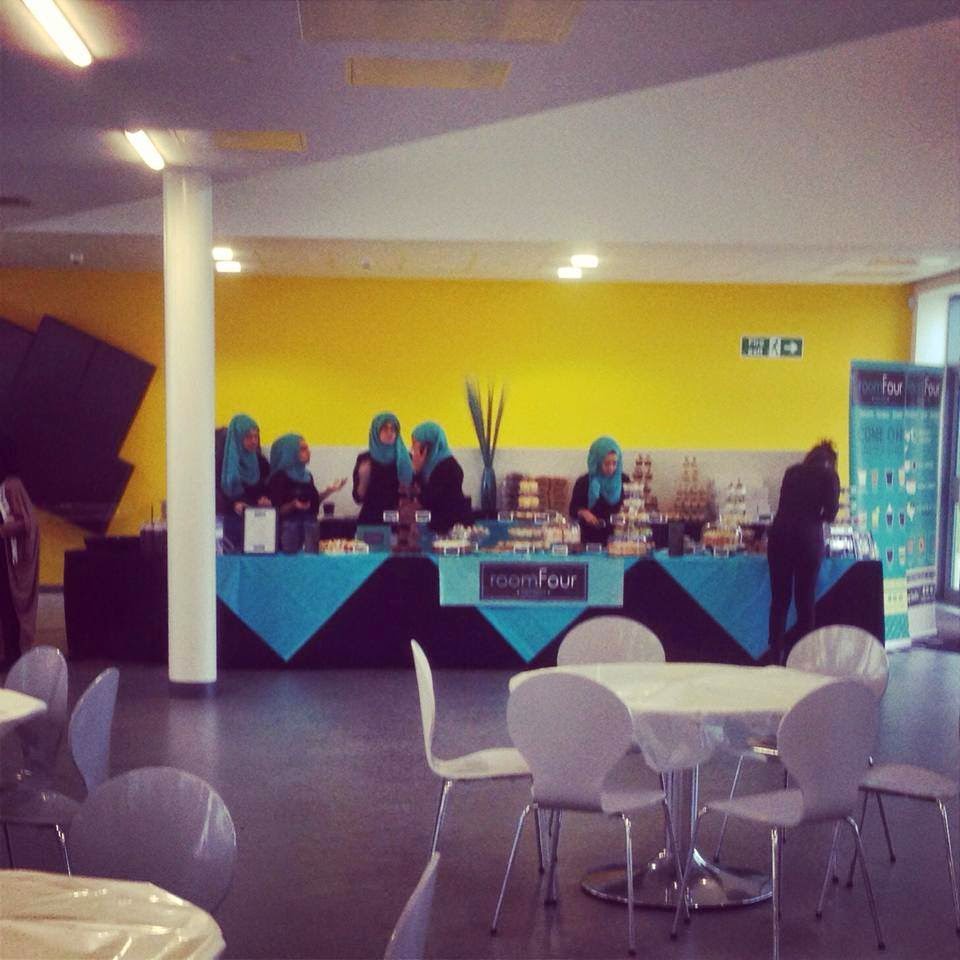 Getting involved in the wider community is also a priority for one of the ’s newest shining hospitality lights. One initiative is attending charity events, with stalls which do not scrimp on detail and fly a very honest flag for the business.

They did not want a “normal stand” as Asif puts it, with a white cloth over the table, but took the extra time to source both cloths and marketing collateral in the brand’s colour palette. Staff serving at these events also wear the uniform that they have for working at the  shop.

Describing the supply chain to us, Salman remarks, “Most of the products we’ve produced are a combination of relationships I’ve built up over the years in my sort of industry (wholesale and retail bakery), and then there’s the others which we’ve sourced whilst putting this place together.”

When asked about the wafer discs with the company’s logo printed on them, that is something which was highlighted as an aspect of their product presentation, with a view to raise brand awareness. Elements like that in the food offering are key components of social media photography, whereby brand visibility can still be present, even if the mechanics of tagging and hashtagging are not. 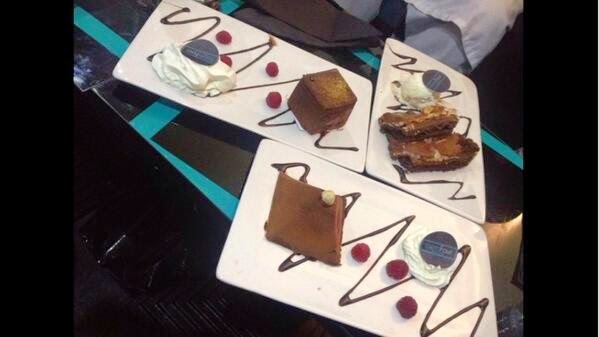 When putting it to them that “It really feels like a brand for the Instagram age,” they both agree, with Asif stating “we’ve gone to town personalising them as much as we can.”


With a zero spend on marketing and advertising, Asif and Salman’s business is testament to the power of social media. Indeed, The Bolton News contacted them on their first day an hour before opening through Twitter which led to a feature in the newspaper’s business section. 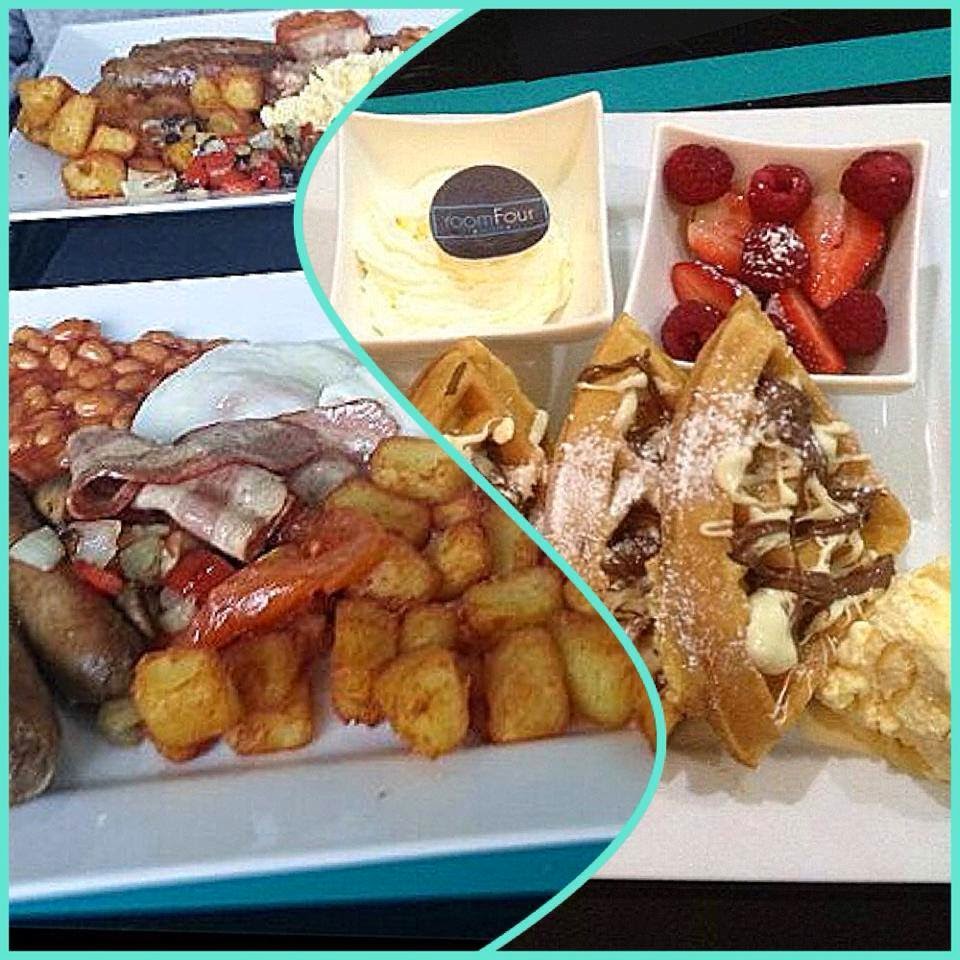 Room Four Dessert is open 8am to 11pm Sunday to Thursday, which extends to midnight on Friday and Saturday. Asif declares “feedback has overwhelmingly been really positive.” Breakfast and Lunch menus are available, but the bottom line still remains that there is always room for dessert. “Even with the lunch menu, we don’t serve anything that’s overly heavy, even the pasta dishes, they’re substantial to a certain extent, but we don’t have any heavy creamy based pastas” explains Asif. Furthermore, it is not uncommon for a full English breakfast to be followed up by waffles at the weekend.

When challenged on the peaks and troughs of sales, the period between 8pm and 9pm was said to be the gold rush. People have at that point usually had their evening meal at home or elsewhere, and so use their outlet in the strictest sense. 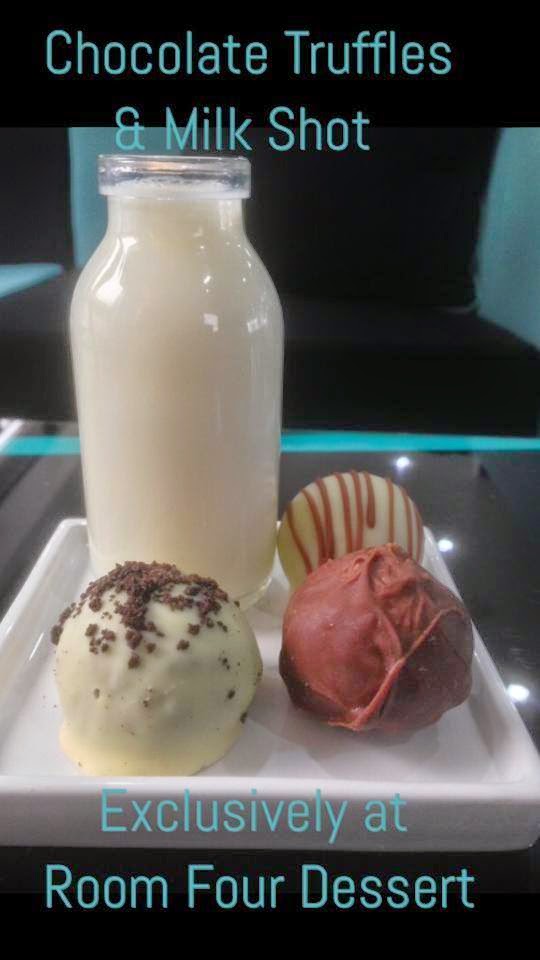 “We've got a lot of ideas which we've not even had the chance to play yet” was a promising statement which curbed any accusation of the novelty factor quickly expiring.  Naturally guarded about their future plans, they did indicate that they are wisely planning to keep a tight rein on detail control. Yet the businessmen insist they have a myriad of ideas to play around with.

The number of employees on the payroll has swelled from an initial eight to a “small army” of 30. It was great to hear of how Bolton Job Centre Plus, Bolton Council and  have worked closely with Room Four Dessert to allow them to benefit from the Youth Contract scheme. Hospitality and catering training was taken care of by the initiative, with no cost to the organisation. Yet training expense was incurred when sending the brand’s two managers on a “coffee course” over the .

ATD under the microscope 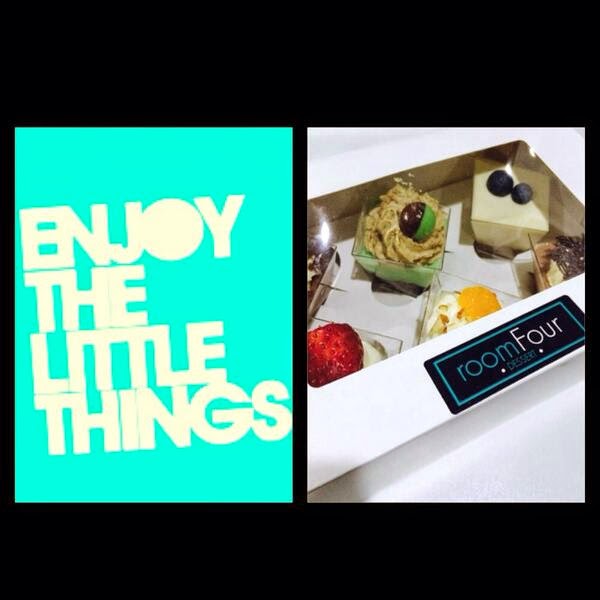 Drilling down to attention to detail, the words “pedantic” and “control freak” feature in their self analysis. Echoing earlier discussion, purely and simply Asif declares “It’s just appreciating what you see.” Restricted by space, the emphasis on takeaway is viewed as a necessity.

“Even with takeaway we've been very particular about our packaging, dead set against any kind of polystyrene packaging, everything had to look as fancy taking away. The way we dress our plates with the drizzle, you still get the same drizzle inside the box.” Questioned as to a Standard Operating Procedure manual or “Bible,” they admit that at first instruction was mainly verbal, but now on the walls in staff areas there is guidance “on how we want things to be presented.” “To be honest with you, none of it’s rocket science, it’s just not overdoing it and being consistent.” 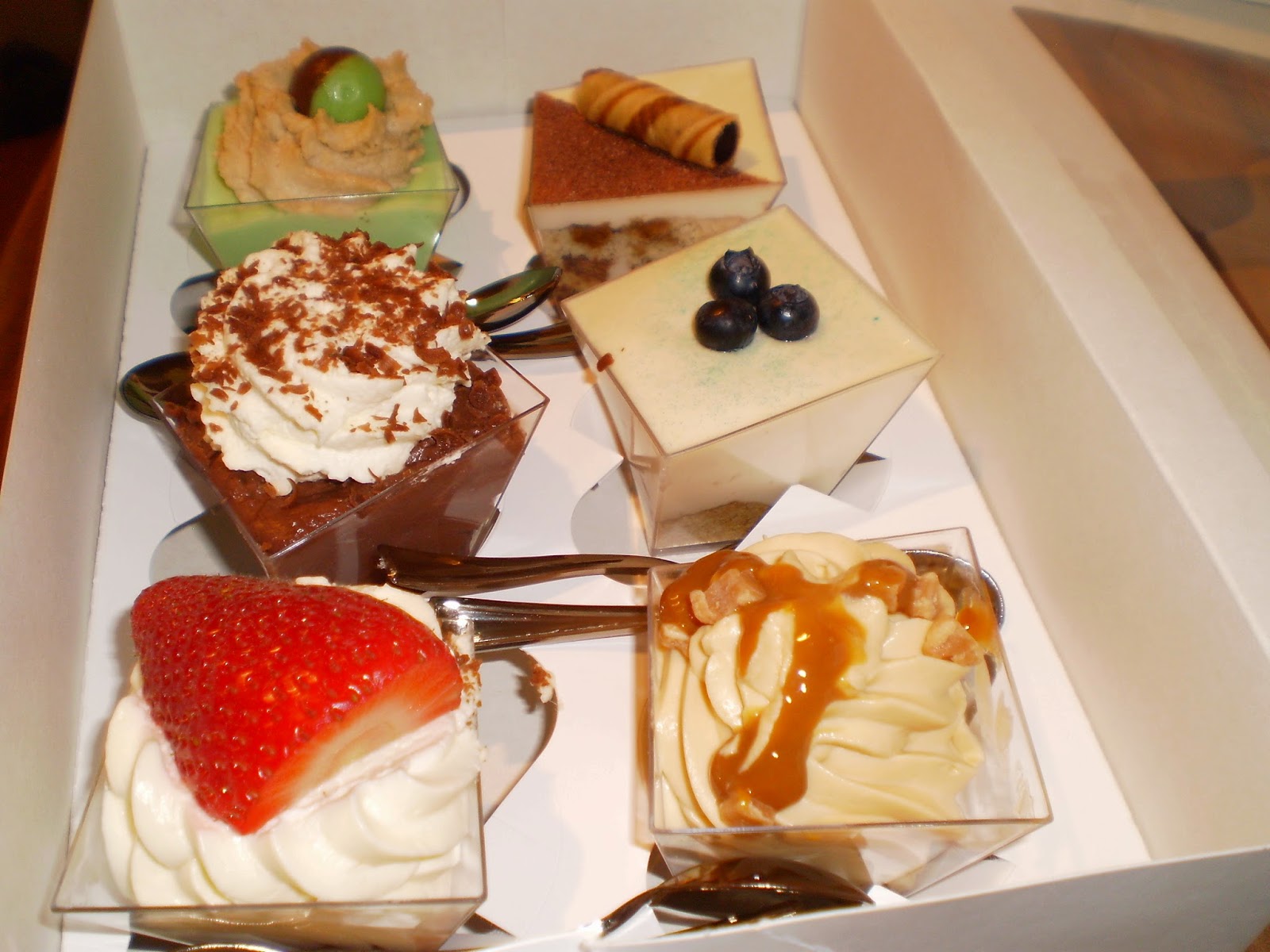 Searching high and low for the eventual “shot” plastic glass for the mini-desserts including Cheesecake and Strawberry Tiramisu has undoubtedly turned this aspect into one of their signature offerings.

A nice surprise was the spoons that look very much like silver metal spoons, but are actually plastic too. Conversely, away from the smoke and mirrors of the finite packaging intricacies, more traditional palettes are covered with an “Old School” section on the menu, dishing out Apple Crumble and Jam Sponge. “Everything we serve is what we like” said Asif.

“It’s all about the presentation, it’s all about the detail” was given when pressed for more on ATD. In keeping their exact future plans under wraps, it is understandable given that a number of businesses are already being “influenced” by Room Four Dessert’s arrival on the scene.

Room Four Dessert is so-called because of its address on 114 Deane Road. In truth, this part coffee shop, part delicatessen part dessert parlour should probably be Room Five Dessert, due to its five-star shake up of the sector by bringing points of difference by the bucket load. Asif promises that this is only the beginning of commitment to detail, in his words, “focusing on the finer points” until they are satisfied. Specially made seating and tables, take things up a notch on the competition even further.

Room Four Dessert is a refreshing addition to the hospitality industry. Guests fall in love with the food offering and the presentation is at such a high level that the items are almost too good to eat. Indeed, perhaps the final word is best left to Salman, who sees the purpose of his business for Guests “to come away thinking you’ve been looked after.”